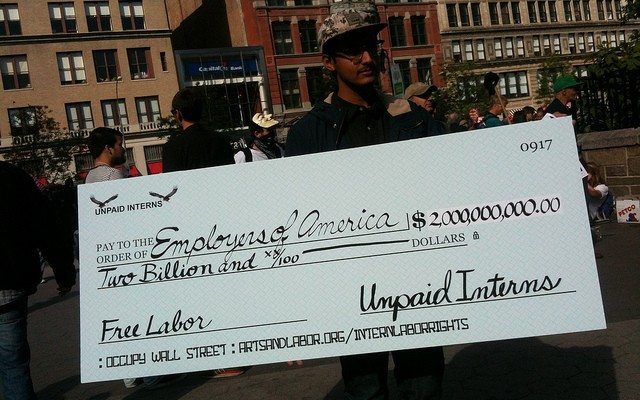 Tragedy of the Unpaid Intern: No Money – No Rights

The world we live in today makes it hard for any twenty-something to find a decent-paying, full-time job. Although we may search and search, many of us retreat back to school, taking on more debt while seeking higher education.

Even so, we have all accepted unpaid internships with the hope that there is a sliver of a chance that we may be hired as a full-time employee. Despite working for free, we expect to be treated along the same lines as any other employee, entitled to certain rights such as lunch breaks, vacation days, and freedom from sexual harassment, right? WRONG!

David Yamada reported that a New York Federal District Court held that an unpaid intern could not bring a sexual harassment claim against her employer, Phoenix Satellite Television US, Inc., under NYC Human Rights Law. The complaint alleges that the plaintiff, Liuhuan Wang sustained injuries as a result of quid pro quo sexual harassment and sexual harassment in the form of a hostile work environment created by her supervisor Zhengzhu Liu.

As a 22-year-old student at Syracuse University, Ms. Lihuan claims that during her four weeks at Phoenix Satellite US, Mr. Liu had almost complete supervisory authority in the New York and D.C. bureaus. Ms. Lihuan’s complaint alleges that Mr. Liu had a history of sexual harassment throughout his employment with Phoenix Satellite and he would prey on female employees just starting their career in America and lure them to his hotel room where he would grope and kiss them, and attempt to have sex with them. He is accused of insinuating that in order to have a successful career, female employees and interns at Phoenix would have to submit to his unwanted sexual desires.

Ms. Lihuan claimed that Mr. Liu had similarly invited her back to his hotel after treating her and several co-workers to lunch when he was in town. After asking her to stay behind to “talk about her job performance,” Mr. Liu guided Ms. Lihuan back to his hotel room, under the guise of an work-related issue, and attempted to grope and kiss her, forcing Ms. Lihuan to push him back and leave the room immediately.

Her grievance is due to the fact that she believes her refusal of Mr. Liu’s sexual advances is the reason she was denied full-time employment. The complaint also mentions that a fellow Syracuse student, Qian Chen, worked for Phoenix and was also sexually propositioned by Mr. Liu. Perhaps Mr. Liu and the people over at Phoenix Satellite need a visit from this guy.

The U.S. District Court judge, Judge Kevin P. Castel, ruled that Ms. Lihuan could not bring a valid claim of sexual harassment under New York City Human Rights Law against her employer because her lack of compensation rendered her unable to meet the employee status required by the statute.

Using federal and NY case law, the district court determine that unpaid interns are not employees as defined under Title VII of the 1964 Civil Rights Act or NYC Human Rights Law. The district court stated that remuneration or the absence of remuneration is an essential element to determining the existence of “the employer-employee relationship.”

According to Bloomberg Businessweek, Phoenix denies that Ms. Lihuan ever applied for a position and Mr. Liu is no longer with the company. This wasn’t the first case, and it surely will not be the last. Although the workplace dynamic for unpaid interns is already changing, maybe it’s time to take another look at the rights unpaid interns are entitled to while working. Perhaps something slightly more than a video at orientation.

And no live demonstrations are necessary.

And remember, its not just women who suffer from sexual harassment in the workplace.