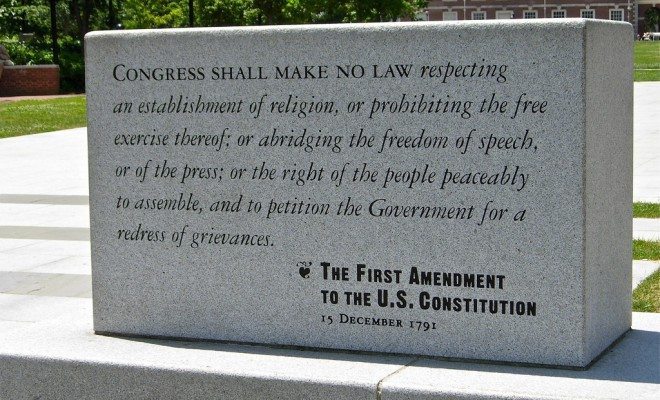 The Supreme Court is finally ruling on free speech relating to social media platforms. Now, before we jump the gun and say putting limitations on free speech is a violation of the First Amendment, let me explain. This conversation was sparked by a recent case — United States of America v. Anthony Douglas Elonis. I originally thought the outcome of this case was absurd — the defendant is serving more than three years in prison for a few eccentric Facebook posts. Really? Then I dug deeper and what I found was quite disturbing.

After losing his wife, his kids, and his job, Anthony Elonis was depressed and angry. He turned to Facebook to rant. And the “raps” he posted threatened his former place of work, his wife, innocent children, and an FBI agent. Below are some excerpts from his “rap lyrics”:

In another post he “rapped” about shooting up a kindergarten classroom:

That’s it, I’ve had about enough
I’m checking out and making a name for myself
Enough elementary schools in a ten mile radius
to initiate the most heinous school shooting ever
imagined
And hell hath no fury like a crazy man in a
kindergarten class
The only question is . . . which one?

Do you feel uncomfortable yet? You can also check out the hearing transcript for more of Elonis’ disconcerting posts. By now, you’re probably pretty creeped out by this weird Eminem wannabe. Well, he served his time: a 44-month sentence. What makes me see red is why he was convicted.

Elonis landed in the slammer for “transmit[ting] in interstate or foreign commerce any
communication containing any threat to kidnap any person or any threat to injure the person of another…” Anyone else think it’s problematic that despite his threats, which blatantly targeted his wife, he was sentenced on a technicality?

Cyber threats are common; Elonis’ wife is not alone. Now the media is examining when rap crosses the line from being “gangsta” to being threatening? This issue is at the crux of the case the Supreme Court will hear in the upcoming term.

While true threats are not protected by the First Amendment, the Supreme Court is struggling with ambiguities like cyber threats. The last time the court had a case involving threats was the 2003 case Virginia v. Black et al. The court defined true threats as “statements where the speaker means to communicate a serious expression of an intent to commit an act of unlawful violence to a particular individual or group of individuals.”

Elonis defended his posts as art, saying he therefore lacked intent to actually carry out those threats. But his threats were specific, well thought-out, and frightening. So were his posts true threats or merely artistic expression? That’s exactly the question SCOTUS will have to answer.

When Does Rap go too Far?

Elonis is one of many who have been put on trial for violent content in rap lyrics. Now who doesn’t love some good ol’ fashioned hate-the-world, go burn in hell, Eminem-style rap? I actually love Eminem – my iTunes holds precisely 54 of his songs. Yes, his raps are graphic, violent, angry, and sometimes downright grotesque. But, aside from his mother, whom he actually bought a mansion, he does not outline specific plans for a single person’s demise. He’s just angry at the world, that’s all.

So, this is where Eminem’s content differs from Elonis’, among others. The debate is tangled — scholars and legal professionals need to consider artistic expression, intent, and how that plays out in the cyber world.

A group of legal scholars are defending Elonis and his “artistic expression” posts on Facebook. Clay Calvert, Erik Nielson, and Charis E. Kubrin argue that the context in which artistic expression is interpreted depends on its vessel of dissemination, in this case, social media. So, higher courts have difficulty determining the context and the intent, which both affect the verdict of threat cases involving social media posts.

The subject is highly complex, but my opinion on this is simple. If you post poorly written yet fear-inducing threats to Facebook, you deserve to be put away. Elonis is clearly not stable, as you can see from the nostalgic posts about his ex-wife, whom he threatened to behead.

Rap is considered an art form, so it’s protected by the First Amendment. But throw social media into the mix and our Constitution becomes difficult to apply. So, yes, I’m relieved the Supreme Court will rule on this convoluted case because it will have long-reaching ramifications. I would certainly feel more secure if social media threats were considered more seriously, especially considering the shooting in Santa Barbara last month.

When it comes to threats, there is a fine line between protecting our First Amendment rights and protecting our citizens. My hope is that the Supreme Court will find a solution by defining when threats should be taken literally and when they are artistic ploys.

Natasha Paulmeno
Natasha Paulmeno is an aspiring PR professional studying at the University of Maryland. She is learning to speak Spanish fluently through travel, music, and school. In her spare time she enjoys Bachata music, playing with her dog, and exploring social media trends. Contact Natasha at staff@LawStreetMedia.com.
Share:
Related ItemsArtistic ExpressionFacebookFirst AmendmentFree SpeechSocial MediaSupreme CourtThreats