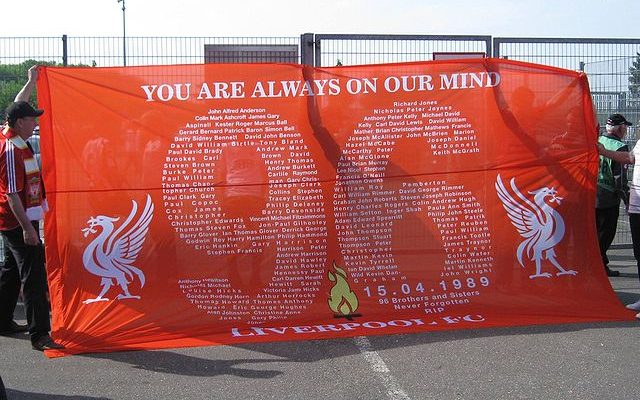 Breaking Down the Hillsborough Disaster Prosecution

More than 28 years have passed since the worst tragedy in British sports history occurred at Hillsborough Stadium in Sheffield, England. Poor logistical planning and police negligence led to an overcrowded supporters’ section that killed 96 Liverpool supporters–including 37 teenagers–and injured over 700 fans. Friends and families of the victims received the bittersweet news on Wednesday that British prosecutors have finally charged six people for the tragedy, following years of media scrutiny and victim blaming. It comes as a surprise to many that an event that supposedly rocked the world of soccer took over a quarter century to resolve. So how did we get from that terrible tragedy of the Hillsborough disaster to the prosecution today?

What Happened in Hillsborough?

English soccer in the 1980s was marked by frequent hooliganism and alcoholism. In order to try to curb incidents–the key word here is “try”–the English Football Association (the FA) called for strong police presence at every match, segregated fan bases, and high steel fencing between the fans and the pitch. All of these factors came into play with this disaster.

The 1989 F.A. Cup semifinal match between Nottingham Forest and Liverpool was one of the most anticipated matches of that season. The FA selected Hillsborough Stadium as a neutral location in which to host it. One week after the host stadium was chosen, the Police Chief Superintendent–who had supervised this type of match the year before–was transferred from his division for a lack of institutional control over hazing. He was replaced by newly promoted Chief Superintendent David Duckenfield who had no experience overseeing a sold out soccer match and reportedly mispronounced one of the team names repeatedly during his pre-match press conference.

The day of the match began as any other and the opposing supporters were segregated into their own respective sides of the stadium. Despite having a larger projected attendance, Liverpool supporters were given the side with less capacity and thus were relegated to a smaller entrance, less turnstiles, and fewer gate options once inside the stadium. As the size of the crowd grew, Duckenfield decided to open an exit gate to relieve pressure–and prevent a potential crush, ironically–from the turnstiles. Thousands of supporters began to spill into the stadium and into the nearest entrance which was a tunnel that led to an already overcrowded pair of sections. As a result, a bottleneck effect was created and those coming into the stadium began to crush those already in the stands against the steel fence, but they did not realize it.

Police officers showed their lack of guidance and experience from the very beginning of the match. A BBC report found that officers were not in the right locations to direct fans away from overcrowded seating areas. They also initially tried to prevent trapped fans from escaping through the fence–fearing pitch invaders. Once the match was stopped to help people escape the crush, officers began to focus more on keeping the peace than keeping people alive. They reportedly chose to not give CPR to potential crush victims and left that job to the fans so “they would not take out their frustration on the police.”

Worst of all were the actions toward the victims once emergency services began to arrive at the stadium. Forty-four ambulances arrived and police only allowed one into the stadium. Supporters took it upon themselves to bring those who needed assistance out to the vehicles, but they were only allowed to leave through the Liverpool side as officers never communicated the situation to Nottingham Forest supporters and blocked their exits from being used.

As news began to spread about the tragedy that had occurred, and families began to wonder if their loved ones who left for the game would ever come home, the police–along with many media outlets–thought it would be best to immediately finding a group to blame for the incident at hand. Officials agreed that this disaster was the fault of the Liverpool fans attending the match, and disseminated that story to the press. The Daily Star, Daily Mail, Daily Express, and the Evening Standard all perpetuated the story published by The Sun’s Kelvin Mackenzie that the “unruly” Liverpool fans robbed corpses, urinated on police officers, and beat up those attempting to give CPR to victims. Duckenfield also blamed the tragedy on the fans for “forcing the gate open” that eventually led to the crush, and then-Prime Minister Margaret Thatcher’s press secretary Bernard Ingham attributed the tragedy to a “tanked-up mob of Liverpool supporters.”

This image of drunk and rowdy fans causing their own deaths seemed to affect how the coroners dealt with the bodies. In an unprecedented move, the coroner in charge decided to test the blood-alcohol level of every victim, even the underage ones, to pinpoint alcohol as the cause. They even ruled the times of death at nine minutes after the match had ended because that was when the crush had supposedly stopped, which ruled out the idea that any of the 96 could have possibly been saved. The findings that all deaths were accidental were upheld by a Divisional Court ruling.

In 1989, a report of an inquiry which was overseen by Lord Justice Taylor–known as the Taylor Inquiry–which investigated the disaster, blamed a “failure of police control” and found that the police had wrongly tried to shift blame onto the fans. But a subsequent investigation in 1997–conducted by Labour party officials–supported the conclusion that the deaths were accidental, and no criminal charges were filed.

Grieving families  left with no justice and few answers chose to respond. In 1998 they filed a civil lawsuit against the South Yorkshire Police. While the case eventually led to a deadlocked jury, it was enough to inspire those involved in the lawsuits to create a Hillsborough Family Support Group, led by a man who lost two teenage daughters in the tragedy.

After years of fighting, the families of the 96 victims of Hillsborough received their first bit of justice in 2009–the 20th anniversary of the disaster–when the British government created a committee known as the Hillsborough Independent Panel to look into what had happened on that fateful April afternoon. In 2012, the group published its findings.

The report was rather damning. It claimed that many of the victims who were declared dead not even 20 minutes after the crushing might have survived if they had received swift medical attention. Autopsy findings showed there were 41 victims who did not have the traumatic asphyxia that caused most of the deaths, and Dr. Bill Kirkup, a physician on the panel, said they might have survived if they been taken to a hospital quickly enough.

The report also found that the police had amended 116 witness statements “to remove or alter comments unfavorable to the police,” and that officers conducted background checks on those who had died–even the children–in an attempt “to impugn the reputations of the deceased.” In addition, the report said the blood-alcohol levels that the coroner controversially measured were “unremarkable and not exceptional for a social or leisure occasion.”

These findings led to the British High Court reversing the accidental death ruling for the victims in 2012, setting the stage for a new investigation and possible criminal charges that came in 2014. In April 2016, the jury involved in the case determined that the 96 fans were unlawfully killed due to decisions made by police officers and “gross negligence” from Chief Duckenfield.

Following the April 2016 inquest, prosecutors were given the opportunity to decide whether to file criminal charges, and on Wednesday, the Crown Prosecution Service announced that it would.

Among those charged are David Duckenfield, who will face manslaughter by gross negligence charges; Graham Henry Mackrell, the secretary and safety officer for club that played in Hillsborough at the time, who faces charges of failing to carry out health and safety duties; Peter Metcalf, the lawyer acting for South Yorkshire Police, who is charged with perverting justice relating to changes made to witness statements; and three other former high-ranking police officers: Norman Bettison, Donald Denton, and Alan Foster.

The victims’ families expressed relief at the decision. Barry Devonside, whose 18-year-old son Christopher died, told Sky News that the families had applauded when they learned that “the most senior police officer on that particular day will have charges presented to him.”

“I was frightened, absolutely frightened, that we were going to be let down again,” he added.

The defendants, with the exception of Duckenfield, will appear at Warrington magistrates court on August 9, according to The Guardian.

Gabe Fernandez
Gabe is an editorial intern at Law Street. He is a Peruvian-American Senior at the University of Maryland pursuing a double degree in Multiplatform Journalism and Marketing. In his free time, he can be found photographing concerts, running around the city, and supporting Manchester United. Contact Gabe at Staff@LawStreetMedia.com.
Share:
Related ItemsEnglandHillsborough DisasterJustice for the 96Liverpool FansSheffield