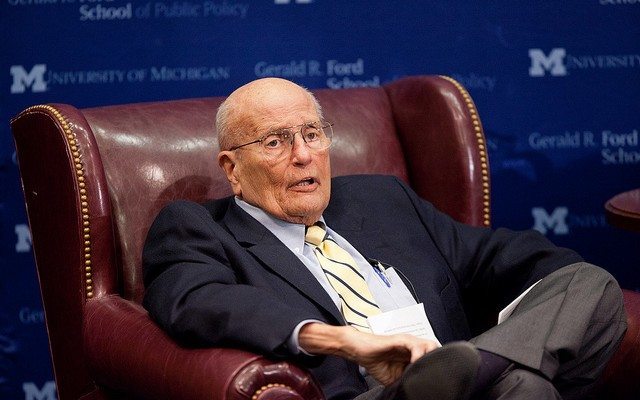 Rep. John Dingell is Better Than You at Twitter

Congressman John Dingell (D-MI) may be the longest serving member of the House of Representatives, but at 88 years old he’s crushing his colleagues at the Twitter game. He may not have the most followers out of the whole pack, but he’s undoubtedly got the most charm and the best sense of humor. Trust me, if you aren’t following him then you’re missing out. Take a look at these gems just from the last month alone.

He isn’t afraid to cut to the chase.

So it’s a tornado full of sharks? That’s what the entire film is about?

#LetsMove RT @RepJeffDenham: My staff made me a birthday cake with lots of Valley veggies to remind me of home. pic.twitter.com/Ty2DbwdK6D — John Dingell (@john_dingell) July 29, 2014

He wasn’t kidding about that cake.

Contrary to what some say regarding @SenSchumer, the most dangerous place in DC is actually btwn me and this birthday cake my staff got me.

He isn’t afraid of a little age joke.

He’s too smart for the Kardashian Kraze.

Staff has now informed me of what a Kardashian is. I’m only left with more questions.

He’s the Marquis of Michigan.

With the House adjourned for the week, I’m taking my talents back to Michigan to spend time with constituents. #MI12 pic.twitter.com/1saVo5ubpT — John Dingell (@john_dingell) July 18, 2014

He doesn’t need no stinkin’ filter.

We didn’t need Instagram to get photos like this 50yrs ago, but I’ll still tag it #nofilter. #tbt pic.twitter.com/BM7DgE1gkU

He knows how to work the crowd.

Working on speech to an auditorium full of Congressional Interns tomorrow. Staff advises it should be less A, more B. pic.twitter.com/YRlJ31cj8c — John Dingell (@john_dingell) July 15, 2014

He won the 6 Degrees of Kevin Bacon game.

Surely a question that has plagued mankind for decades. RT @USATODAY: Why John Dingell is one degree from Kevin Bacon http://t.co/5ItjtYxnWF

He only endorses the truly important issues.

He knows you don’t #TurnDown when his beloved Tigers are winning.

That is now the second time I’ve tweeted or retweeted the #TurnDownForWhat hashtag. That said, go @tigers! #BlessYouBoys