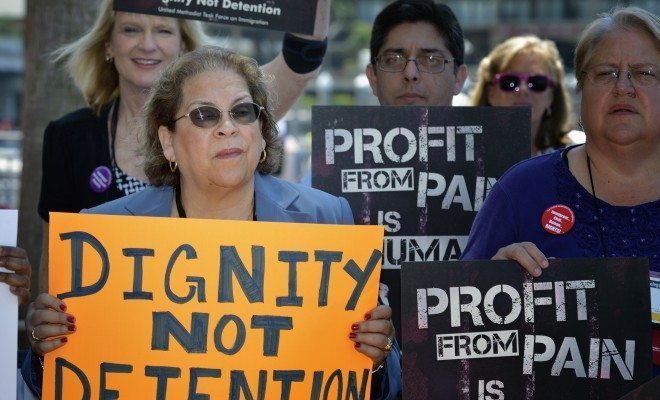 Columbia University Backs Away From Private Prisons: We Should Follow Its Lead

Columbia University made history last week when it became the first U.S. university to divest its endowment from the private prison industry. A student-led activist campaign has put pressure on the Board of Trustees to divest since early 2014 when a small group of Columbia students discovered that the school was investing in G4S, the world’s largest private security firm, and the Corrections Corporation of America (CCA), the largest private prison company in the United States. After a vote last week, Columbia’s $9 billion endowment will now be void of its shares in CCA and its estimated 220,000 shares in G4S. Divesting from an industry that makes its money by breeding human suffering is a move that should be loudly applauded.

The divestment vote occurred within the larger discussion of mass incarceration and the tribulations that stem from the systemic injustices that American prisons propagate. While local jails and state and federal prisons all seem to value a punitive rather than rehabilitative approach, private prisons are by far the cruelest. There is an inherent conflict between the supposed goal of the criminal justice system–rehabilitation–and companies’ profit motives. For-profit, private prisons make up a multibillion-dollar per year industry. The U.S. Department of Justice reports that as of 2013, there were 133,000 prisoners in private prisons, or 8.4 percent of the U.S. prison population. These numbers break down to 19.1 percent of the federal prison population being detained in privately owned prisons, and 6.8 percent of the state prison population.

Since 1990, violent crime in America has dropped 51 percent, property crime has fallen 43 percent, and homicides are down 54 percent. But incarceration rates since 1990 have increased by 50 percent. If crime is down, why do we have so many more people in prison? Due to the war on drugs and the increase of harsher sentencing laws, more low-level and non-violent offenders are sent to prison. Almost half of state prisoners are serving time for non-violent crimes, and more than half of federal inmates are imprisoned for drug offenses. Nobel laureate economist Joseph Stiglitz wrote, “This prodigious rate of incarceration is not only inhumane, it is economic folly.” The United States has 5 percent of the world’s population but 25 percent of the world’s prison population. We incarcerate a greater percentage of our population than any other country on Earth, and our compulsion to incarcerate costs taxpayers $63.4 billon per year.

The overcrowding of jails and prisons across the country and a reluctance to adequately finance these correctional facilities precipitated the movement toward private prisons, which proponents claimed could result in overall prison cost reductions of 20 percent. However, allowing the facilities to be operated by the private sector has resulted in a meager 1 percent cost decrease. With crime rates on the decline, private prisons began doing everything they could to increase imprisonment rates so that they could stay in business and continue to make money. From 2002 to 2012, CCA, GEO Group, and Management & Training Corporation (MTC), a contractor that manages private prisons, spent around 45 million dollars lobbying state and federal governments, arguing for harsher laws and more arrests. These corporations also poured hundreds of thousands of dollars into the election campaigns of governors, state legislators, and judges in order to ensure that their plans become laws that guarantee more people will be incarcerated, so they can continue to make money.

Some people try to justify this system with the thought that people who are in prison are there for a reason. But this wishful thinking is untrue. About 50 percent of immigrants who are in prison are detained in privately owned prisons, and the majority of these people are simply being detained while waiting for their cases to be decided in court. In other words, immigrants who have not been convicted of any crime are being housed in violent, corrupt, dangerous private prisons while they wait for months for courts—that are often illegally being paid off by corrupt companies like CCA to keep people in prison—to decide their fate. The private prison industry has an incentive to keep people in jail. If their business plans included imprisoning to rehabilitate and treating people for mental health or drug addiction issues that may have contributed to their arrests, the industry would collapse. Instead, private prisons are rampant with abuse, neglect, and misconduct; private prisons understaff their facilities to save money, ignore pleas for help and prisoner-on-prisoner violence within the prison, and even refuse healthcare to inmates. In order to make the most profit, the private prison industry wants harsher drug laws, longer sentencing, and wants to increase recidivism rates.

In New York, about $60,000 of government money is spent per year to keep just one inmate imprisoned, while just under $20,000 is spent to educate an elementary or secondary school student. This trend extends nationally: no state in the country invests more—or even an equal amount—on educating an individual student than on housing a prisoner. Maybe if we relaxed drug laws and unreasonable sentencing, focused more on rehabilitation than punishment, did not allow prejudiced and ill-intentioned companies like CCA to spend millions on lobbyists, and we invested more on education than on our corrupt criminal justice system, the United States would be a happier, healthier place.

Columbia University’s divestment from the private prison industry will not solve the issue of mass incarceration. It will not redesign the broken system that we call criminal “justice” in America. It won’t even put CCA or G4S out of business or make a sizeable dent in their net worth. But what divestment will do is beyond economic comprehension. Refusing to reap benefits from companies founded upon violence forced on people by virtue of their race, class, or citizenship status is a social stance that proves a complete rejection of everything private prisons stand for. When you stop investing in something, you’ve stopped believing in it. And no one should believe in the private prison industry.