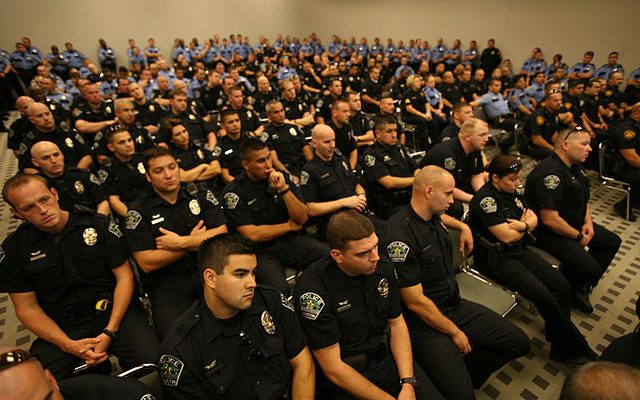 "Hundreds of Police at a Meeting in Texas" courtesy of Leif Skoogfors; License: (Public Domain)

New Texas Law Will Fine Police for Not Reporting Shootings

Texas Gov. Greg Abbott signed a bill into law on Thursday that would fine state law enforcement agencies up to $1,000 a day for not reporting officer-involved shootings in a timely manner.

The law, which will officially be enacted in September, was created with the intention of strengthening a current Texas law–passed in 2015–that requires departments to report to the attorney general’s office any time an officer firing their gun results in injury or death.

Gathering data on police shootings has been an issue for the state, whether it’s been through misrepresentation or refusal to comply. A Texas Tribune investigation was only able to gather data on police shootings between 2010 and 2015 from 36 cities that had 100,000 or more residents, totaling less than half of the state’s population. While some precincts were more than willing to put the information on their website, others fought public information requests, gave heavily redacted records, or said they did not keep track of police shootings. Corpus Christi and Pasadena, for example, did not specifically track officer-involved shootings.

Even after the 2015 law was enacted, some departments decided to take their time in filing their reports and reported their data to the state months after the incident had actually occurred. The late responders typically only filed their reports after state publications pointed out that which departments had been slacking.

State Rep. Eric Johnson, the author of the new bill, said that this law will help curtail the inconsistent reporting and provide the state with the data it needs to analyze the issue of police shootings.

“I’m glad that he signed the bill, and I believe that we’re well on our way to leading the nation in getting to the bottom of what causes these fatal encounters between police and citizens, because we’re going to have the data,” Johnson, a Dallas Democrat, said Thursday to the Texas Tribune.

The new law gives departments a 30-day window to file a report after the shooting. Once that window has closed, the attorney general’s office can investigate and notify the department it has seven days to clear up any unreported shootings. After that, the state will be able to fine departments $1,000 a day. All of the money collected from these fines will be going to Texas’ Crime Victims’ Compensation Fund.

The bill did not contain everything that the authors originally wanted. State Sen. John Whitmire, a Houston Democrat, was unable to add a requirement for the attorney general’s office to build and maintain an online portal that would collect and analyze police shooting reports to the bill. The addition was struck down on the Senate floor.

Texas legislators might want to revisit that provision at some point. As of this article’s publication, 37 people have been shot and killed by Texas police officers this year, which is on pace to eventually match the total number police killed in the state last year.

Gabe Fernandez
Gabe is an editorial intern at Law Street. He is a Peruvian-American Senior at the University of Maryland pursuing a double degree in Multiplatform Journalism and Marketing. In his free time, he can be found photographing concerts, running around the city, and supporting Manchester United. Contact Gabe at Staff@LawStreetMedia.com.
Share:
Related ItemsBillGreg AbbottLawPolice ShootingsState LegislatureTexas