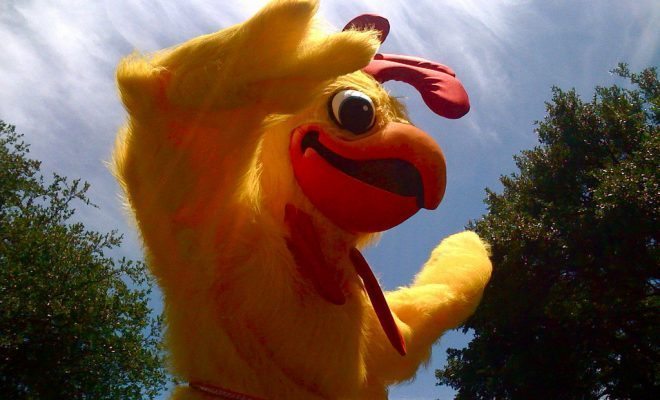 No Clucks Given: Attorney Dresses up in Chicken Suit During Closing Argument

If you watch a lot of “Law and Order” you might be under the impression that courtroom stunts are common–that pulling out props or making grand gestures are the norm. But in reality, stunts are relatively rare, and successful stunts are rarer, which makes the fact that attorney Nick Rowley dressed up in a chicken suit during a closing argument and won a lawsuit brought against the Kern County School District in California, all the more impressive.

The case was Mitchell Carter v. Kern County School District and focused on the events that transpired at Bakersfield High School in 2010. According to Courtroom View Network, Mitchell Carter, a student at the time, dressed up in a chicken suit at a football rally to make fun of their rival Clovis West High School, which has a golden eagle mascot. He was encouraged to do so by the administration. When Carter went out in the suit the first time, he was attacked by students from Bakersfield. Carter tried to back out of entering the rally a second time, but says that he was compelled to go back out by the administration. Carter claims that a school administrator warned that he may have to pay the chicken suit’s rental fee if he didn’t go back out.

When Carter, dressed in the chicken suit, entered the rally the second time he was rushed by Bakersfield High School students and suffered a traumatic brain injury. He now suffers from psychological problems, has a hard time keeping up with college classes, and will need to pay for growth hormone therapy for the rest of his life because his pituitary gland was damaged. In addition to accusing the school of pushing him to do the stunt, Carter also claimed that the school didn’t break up the fight that caused his brain trauma in a timely fashion.

Rowley said: “He was put in the most hated, personified figure at that time: the opposing team’s mascot…They dressed him up and had him play the fool.” Here’s a video of Rowley explaining the situation, chicken suit and all, courtesy of Courtroom View Network:

Rowley donned the chicken costume about 20 minutes into his closing argument, to make a point about why Carter put his suit on in the first place. Rowley pointed out it wasn’t for personal glory, or attention, but because of his school spirit–Carter went through the humiliating act of wearing a chicken suit because his school asked him to. While the defense objected to Rowley’s use of the chicken suit, its rhetorical heft was undoubtable. While props in the courtroom don’t always work, Rowley’s calculated risk clearly paid off. After all, it’s not every day you see an attorney put on a chicken suit in the middle of a courtroom…at least not outside of a TV show.

Anneliese Mahoney
Anneliese Mahoney is Managing Editor at Law Street and a Connecticut transplant to Washington D.C. She has a Bachelor’s degree in International Affairs from the George Washington University, and a passion for law, politics, and social issues. Contact Anneliese at amahoney@LawStreetMedia.com.
Share:
Related ItemsAttorneyCaliforniaChicken SuitLawLawsuitSchool