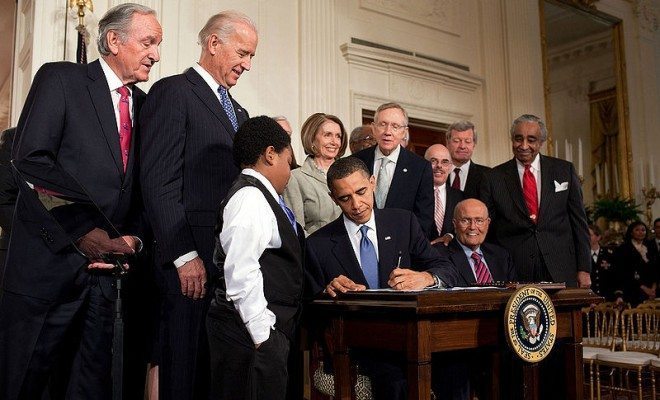 Is it Legal for the President, and not Congress, to Implement ACA Delays?

The Obama Administration once again announced an extension of an Affordable Care Act deadline this week. For anyone who’s counting, we’re up to at least 11. This time it’s late signups for people who have technical problems that prohibit them from signing up by the March 31 deadline. If that’s you, you can now apply for an extension to mid-April by checking a box on the application. The Administration is trusting that you’ll abide by the honor system and will really only ask for an extension if you need it.

The President has issued many delays since the healthcare law was implemented. Here’s a brief recap:

There is predictably criticism from Republicans ranging from the need to fix key parts of the law to repealing it outright. One suggestion is to repeal the tax on medical devices, a main revenue source for the Affordable Care Act, while others have called for an investigation looking into the constitutionality of the delays. Michael McConnell, quoted in the Washington Post, has said that the continuing deadline delays are blatantly illegal. “Statute does provide broad discretion, but unless there’s some explicit statutory authorization they don’t have the right not to do it … That’s the difference. Suspending and dispensing with statutes are equally impermissible.”

When it comes to allowing the executive branch to implement delays in the law, the main concern is over Congress’ role. Congress, the main federal legislative body, is supposed to take up these delays. By allowing the President to give out executive orders delaying legal statues, legislative jurisdiction becomes confused. Who, in fact, has the right to make these delays?

Dennis Futoryan
Dennis Futoryan is a 23-year old New York Law School student who has his sights set on constitutional and public interest law. Whenever he gets a chance to breathe from his law school work, Dennis can be found scouring social media and examining current events to educate others about what’s going on in our world. Contact Dennis at staff@LawStreetMedia.com.
Share:
Related ItemsCongressDelayFederalFederal IssuesGovernmentHealth CareLawLegislationObamaObamacarePresident