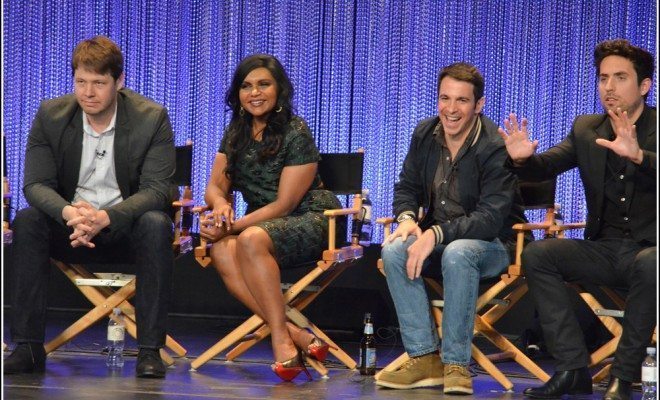 Season four of “The Mindy Project” featured Mindy Lahiri battling her traditional fiancé (Danny Castellano) to continue working as an OBGYN rather than becoming a stay at home mother. In the United States, stay at home mothers are still far more common than stay at home fathers–so the couples’ fight, although fictional, reflected our national gender expectations.

In the second-to-last episode Mindy finally says the things to Danny that had probably come to the wealthy, New York doctor’s mind the minute she had first heard of his desire for her to give up her career and her new fertility clinic.

Here is an excerpt from the climactic argument:

Danny: Oh, yeah, right, right, your career.  You’re too busy getting half of Manhattan knocked up, and Leo, he’s just out there by himself alone, playing pat-a-cake against a wall while his Mom’s working?…
Mindy: Every time that you disagree with something that I do, it’s a referendum on my character. If I want to go to work, it means I’m a bad mother. If I want to have a second glass of wine, it means I’m out of control.…In your eyes every single thing I do is more evidence that I’m a bad person.
Danny: You’re not a bad person. You want me to help you make good decisions, don’t you?
Mindy: Yeah, I thought I made good decisions, and now you’re just making all the decisions for me.
Danny: So what, if it’s the right decision?…You are an amazing mom…Why not do it again?
Mindy: I’m also a good doctor. I don’t want to have to give up any more to have more kids.
Danny: That’s selfish.

And don’t worry, the fight does not end there. Mindy makes clear, in no uncertain terms, that her desire to keep her career, which she has invested at least 11 years of her life just to be trained in, does not make her selfish. At last she stands up for herself. After Danny’s season-long agonizingly belittling utterances, to the mother of his child, Mindy’s rational, valid points are more than welcome. She even throws in some impressive diction (i.e. “referendum”). But the one thing Mindy doesn’t say to her partner is: Why don’t you be the stay at home parent?

The season finale takes viewers back to Mindy and Danny’s introduction. Mindy is able to perform a difficult delivery that Danny had scheduled as a C-section. The plot suggests Mindy is the better doctor because she performed a difficult maneuver so the patient could have her preferred natural birth plan, instead of Danny’s preferred C-section plan. So, from a logistical stand point, why should the better doctor stop working just because she is a mother?

Working moms are nothing new to American television or American reality. In 2012, 29 percent of mothers, with underage children, stayed at home and did not work. Meaning that, in the United States, working mothers are the norm. But despite the power of those numbers, 51 percent of participants in a 2013 Pew Research Center survey said children were better off if they had mothers who stayed at home rather than worked, while only 8 percent said the same about fathers.

So, in 2015, is it too radical to suggest, on television or in reality, that the man occupy the domestic sphere? Too radical for even Mindy to utter? Apparently so.

Ruby Hutson-Ellenberg
Ruby Hutson-Ellenberg is a 2016 Hunter College graduate, where she majored in English with a concentration in Creative Writing. As a native New Yorker, Ruby loves going to the theater and writing plays, which have been particularly well received by her parents. Contact Ruby at staff@LawStreetMedia.com
Share:
Related ItemsCareer ChoicesEntertainmentFeminismMindy KalingNew York CityTelevisionWomen