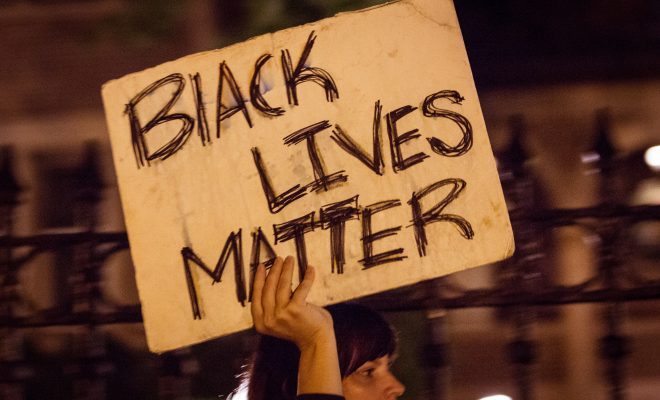 I have a bad habit. Every morning, in between snoozing my alarm 15 times and finally dragging my butt out of bed, I scroll through my Facebook and Twitter feeds. Usually it’s more of the same–more people I went to high school with got engaged, the (many) dog accounts I follow have posted cute puppy pictures, friends are bitching about a) Hillary Clinton, b) Donald Trump, or c) both. It’s an act of masochism, in a lot of ways–I don’t necessarily care about any of those posts (minus, of course, the puppy pictures.) As a journalist who focuses on law and policy for millennials, social media is a free window into the mood of the U.S. But as a consumer of all things law and policy, and someone who is paid to keep a finger on the zeitgeist, this week has been a nightmare.

It started with the killing of Alton Sterling who was shot by Baton Rouge police earlier this week. Although start is a misnomer in a lot of ways–if we want to look to the start we maybe need to consider the 136 black people killed by police this year, or maybe the 2013 acquittal of George Zimmerman that sparked the Black Lives Matter movement, or even the fact that policing in the American South was in many ways born out of a desire to control freed slaves after the Civil War. But today’s not the day for a history lesson, and so for all intents and purposes, we’re going to start with Alton Sterling. He was shot and killed while held down by police officers, and then the protests began. And then, as always, voices began to drown out the protests. They said “we don’t have all the facts,” they said “he shouldn’t have been resisting,” and his criminal record was brought up time and time again, as though any of those were reasons for the police officers to take his life.

Then there was Philando Castile, a 32-year-old black man from Minnesota. He was pulled over for a broken tail light, a relatively routine traffic stop. According to his girlfriend, who was in the seat next to him, he was asked for his license and registration, and he told the officer that he had a concealed weapon and a license to conceal carry. He reached for his ID, and the officer shot him four times. He died that night. The protests began, and as always, other voices began to drown out the protests. They said “we don’t have all the facts, they said “maybe he moved too quickly,” and they pointed out that police officers are trained to deal with every situation. These were reasons given for why a traffic stop ended with a man dying in the front seat while his girlfriend sat next to him and his girlfriend’s four-year-old sat in the back seat.

And now it’s today, Friday, July 8, and there was a shooting in Dallas last night during a peaceful rally. Snipers shot 12 police officers and two civilians–five of those officers are dead. Three suspects have been taken into custody, a fourth was killed during a standoff. According to the New York Times, “officials said the attackers were planning to injure and kill as many law enforcement officers as they could.” And so again, I woke up and my Facebook and Twitter feeds were angry.

But this was a different kind of anger. I saw post after post blaming the tragedy in Dallas last night on the protesters, on the fact that we’re now talking about the injustices that have permeated American policing for centuries, and on the fact that sometimes there’s not just bad guys and good guys but that it’s much more complicated than that.

To blame the tragedy in Dallas (and it was absolutely a tragedy) on the Black Lives Matter movement, to blame it on the people who just want to make sure that justice is afforded to all Americans, and to use the deaths of five police officers who were working the protests to satisfy preconceived notions about how systemic racism in our justice system simply doesn’t exist, despite all the evidence to the contrary is an injustice–for Alton Sterling, for Philando Castile, for the five police officers who were shot, and for the country as a whole.

Anneliese Mahoney
Anneliese Mahoney is Managing Editor at Law Street and a Connecticut transplant to Washington D.C. She has a Bachelor’s degree in International Affairs from the George Washington University, and a passion for law, politics, and social issues. Contact Anneliese at amahoney@LawStreetMedia.com.
Share:
Related ItemsAlton SterlingBlack Lives MatterDallasFacebookPhilando CastileSocial MediaTwitter