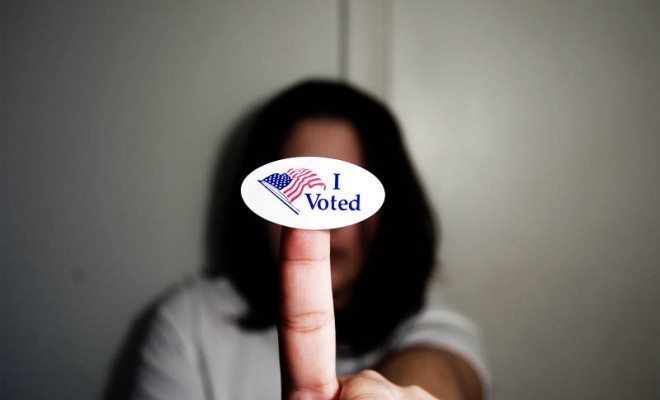 This is going to be a fun one!

Some of y’all know a while ago I was writing a personal blog, stumbled across Law Street, and was fired up by one of the contributors, Hannah Winsten. I wrote a rebuttal and the rest is history. I’ve been writing for Law Street for a few months now and have had the greatest pleasure in doing so, the team rocks! But in the back of my mind I always wondered when I would be able to have another encounter with Hannah. I like to think of her as the antithesis of me, she stands for everything that I don’t believe in, but in a good way!

The day has finally come. Ladies and gentlemen, Hannah is back and she has fired me up!

Hannah wrote a piece this week entitled, “LADIES: Vote Republican and You’ll Get the D” and I thought this will be a fun one. Boy was I right! I love how she starts right off with a sarcastic tone, throwing in those traditional pop culture references before pulling out the big words like ‘racist,’ ‘sexist,’ ‘homophobic’ and ‘Republican.’

First, she certainly did get it right that President Obama is getting close to being a lame duck, actually at this point he’s checked out and moved on to retirement on the golf course while still in the White House. Things haven’t gone the way he planned and homeboy has chunked deuce on the country, as pointed out by fellow Law Street writer Katherine Fabian here.

Here we go again with Hannah only selecting bits and pieces of a report, only outlining what is beneficial and relevant to how she thinks and not the whole story. Yes, Politico reported a survey that states 49 percent of single women hold a negative view of the Republican Party, but it also says that 39 percent view Democrats unfavorably. If you go deeper into the article you also see that 48 percent of married women prefer a Republican to a Democrat. It isn’t a very positive article for Republicans but at least it is the truth and they are trying to do something about it.

Yes, the Republican Party has been perceived as the “good ole boys” party and women were neglected in some respects. But there are still plenty of Republican women in the country and I’m sorry but the idea that Republicans support rape and domestic violence is just vile. Does Hannah see all Republicans as toothless, alcoholic, wife-beating-if-they-step-out-of-the-kitchen inbreds? Referring to conservatives as ‘conserva-turds’ is almost as ridiculous as your girl, DNC Chairwoman Debbie Wasserman Schultz, making the comment that “What Republican tea party extremists like Scott Walker are doing is they are grabbing us by the hair and pulling us back.” Maybe you and Debbie get together in the last few days and brainstormed creative ways of calling the Republican Party abusive? Even people in the Democratic Party are distancing themselves from that foolish woman and her hideous remarks.

Nowhere in any Republican initiative or in that specific poll does it say that Republicans are planning to tell anyone that they are wrong. Nowhere. The report says that it is a “lack of understanding” between women and Republicans that “closes many minds to Republican policy solutions.” But let’s be honest, we don’t need a poll to tell us that there is a lack of understanding between the American people and politics. Not many in my generation or in younger generations take the time to understand politics, they just go with what they hear on television and we both know that is not an accurate depiction of politics at its core.

Hannah claims that Republicans will basically shake their fingers at all women, tell them they are wrong, and expect them to go out and vote for the GOP. What exactly are you reading that says any of that? Oh right, it is all based on opinion, not fact. Let’s go back to the Politico article where it states that the group that took the poll suggests “Republicans deal honestly with any disagreement on abortion, and then move to other issues.” Again, the report suggests this for Republicans. On the upside, there have been several Republicans who have come out in support of over-the-counter birth control, and many conservatives in general are Pro-Choice. Yes, Republicans should deal with the abortion topic with real facts, solutions, ideas, and then move on. Unlike Democrats who are still ignoring the facts of the IRS scandal, the Benghazi issue, ISIS, and most importantly Obamacare.

R.R. Reno made valid points in his opinion piece on the dilemma facing social conservatives, but my dear Hannah took what she wanted and neglected the rest. She assumes that this piece is to attack single women, assuming that they live with 12 cats and are terrified that they will end up alone so they recognize the strengths of getting a hand out when they are older and thus support the Democratic Party. What Reno was doing was quoting a statistic about marriage and vulnerability and then putting his two cents in on why McKinsey, a fictional character, may feel judged when someone “opposes gay marriage, because she intuitively senses that being pro-traditional marriage involves asserting male-female marriage as the norm — and therefore that her life isn’t on the right path.”

That is a valid argument and a valid way of thinking. I know that I was raised to believe that the order of life is to graduate high school, go to college, get a job, get married and have kids all under the age of 30. Guess what? I’m 29, I have two degrees (working on a third), and two jobs, but I am not married or have kids and it is a scary idea sometimes. Our parents’ traditional ways were engraved in our minds as young children, but the path our parents and older generations took is not what our generation wants to take. It will take time, but not everyone feels supported in their ventures because we aren’t doing what we were “supposed” to do. I’m glad I messed up and took a different path. I’m a better person for it. Reno was simply putting those ideals in a simple statement and showing that McKinsey chose to reject the norm so that she could feel accepted in her choices, and nothing is wrong with that.

I hate to break it to you, Hannah, but if you think women are voting Democrat because they “want to have control over their own bodies, their own reproductive systems, and their own lives. They want to be able to support ourselves. They want to lead lives that aren’t wracked with violence,” then you should probably vote for the unrepresented party. Democrats are taking away more of your rights than Republicans. Remember that tiny thing called Obamacare? Yeah, do some research and you will find there are more restrictions than advantages. You want to live your own life without someone dictating what you can and can’t do? Should probably take another look at the Democratic Party and its belief in big government, controlling every aspect of our lives and making people believe that they are entitled to handouts instead of working hard for what they have in life. Democrats would rather rich people do the work and hand the benefits to the less fortunate and lazy. Democrats believe in helping everyone but also in accruing more debt — that doesn’t help the economy, it hurts it.

At least Republicans are trying to fix their issues, listen to the people, and change (slowly) with the times more so than Democrats. Not to mention they are taking responsibility for their errors.

If you think Hillary is going to be in the White House in 2016 you’ve got another thing coming. The same “what difference does it make?” Hillary who was so flustered and frustrated about being questioned on the topic of Benghazi that she lost her cool? The same Hillary Clinton who admitted to leaving the White House with her husband President Bill Clinton, personally $10 million in debt? I’m not sure that is someone I would want in the oval office. Let’s be truly honest. We all know that while President Clinton was busy getting blow jobs in the Oval Office Hillary was really running the country. So she’s been president, just behind the scenes, and we don’t need her again.

I’ve said this before, everyone is entitled to their own opinion but the moment that opinion turns into something disrespectful I have an issue with it. The holier than thou, self-righteous, talking down to anyone who doesn’t agree with you tone is not cool. I enjoy Hannah’s quick wit and sarcasm but sometimes she crosses the line. Republicans are people too and in most cases highly educated people who just don’t share your views. Ease up on the conservative detest because you are simply putting yourself in the category of abuse that you talk so much about hating.