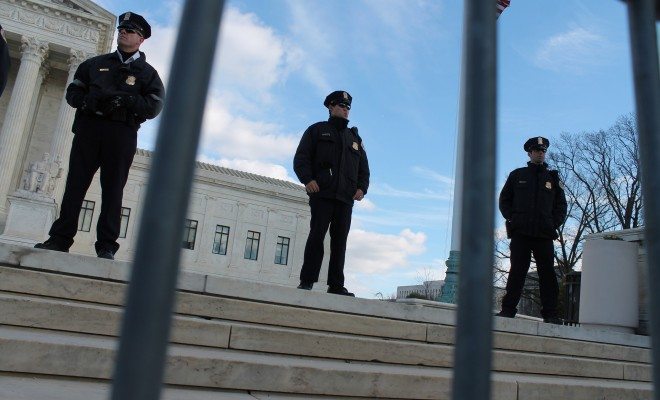 SCOTUS Just Made a Battlefield Out of Women’s Bodies

Folks, this is not a happy Tuesday.

Why? Because the Supreme Court made a really shitty decision yesterday. (And we’re not even talking about the bullshit Aereo ruling from last week. WHY DO YOU TAKE ALL THE GOOD THINGS AWAY?!)

Monday, with a slim 5-4 majority, SCOTUS ruled in favor of Hobby Lobby, deeming that employers can’t be legally compelled to provide insurance coverage for birth control and emergency contraception that are in conflict with their religious beliefs.

This decision is so wildly fucked up on so many levels. SO. MANY.

For those of you who don’t remember, we covered the Hobby Lobby case here at Law Street earlier this year, but here’s the quick gist: the company, which is owned by a family of devout Christians, is not a big fan of the Affordable Care Act and its rules regarding birth control.

While so far Hobby Lobby’s been covering 80 percent of the mandatory contraceptives listed in the ACA for its employees, it’s been holding out on two forms of intrauterine contraception and two forms of emergency birth control. Why? They’re spewing some zealously crap-tastic pseudo-science claiming these methods are “abortifacients,” which they unequivocally are not.

Despite the fact that Hobby Lobby’s case is built on totally unsubstantiated non-science and a complete disregard for the separation of church and state, SCOTUS decided to rule in their favor.

Now, thanks to this fuckery, if your boss’ religion says you shouldn’t be preventing or planning your pregnancies, sorry ladies! No bodily agency for you. The guy who signs your paycheck each week now controls your uterus.

Oh, and just to be clear, this refusal to cover birth control methods only applies to women. Vasectomies, which serve exactly the same purpose for men, will still be covered. So we’re really not talking about the religious evils of family planning or bodily autonomy. We’re only talking about the evils of women maintaining control over their lives.

First of all, let’s talk about who made this decision, shall we? A tiny little group of men.

Literally. That slim majority who voted in favor of Hobby Lobby was 100 percent men. Every female Supreme Court justice sided with the dissent. EVERY. SINGLE. ONE. (Obligatory shout out to Justice Stephen G. Breyer for being the only dude to side with the feminists on this one. We appreciate you, sir.)

So, let’s all take a moment and sigh gigantic, heaving sighs of exasperation at the fact that the bodies of women all over this nation have just been legislated by five, non-uterus-having men.

This could not be clearer. This ruling is about controlling women. Plain and simple.

And it gets worse. Aside from the fact that a bunch of entitled, sexist, wing-bat man-justices just infringed upon women’s bodily autonomy, they also opened up a Pandora’s Box of legal ambiguity.

As the oh-so-wonderful Justice Ruth Bader Ginsburg points out in her ball-busting dissent, exempting employers from providing health insurance coverage for birth control because of their religious beliefs brings up a slew of other possible exemptions.

Will companies owned by Jehovah’s Witnesses be allowed to withhold coverage for blood transfusions? Can Scientologists deny their employees antidepressants? The pig-derived ingredients used to produce anesthesia, vaccines, and pills coated in gelatin can conflict with the religious beliefs of Muslims, Jews, and Hindus. Will employees of companies held by owners of these religions find themselves without coverage as well?

In truth, maybe. That’s the precedent the court is setting with this Hobby Lobby decision. So, watch out if you work for an orthodox Jewish-owned company and need surgery. You might have to suffer through it sans anesthesia.

Seriously? This shit is ridiculous. The legal absurdity SCOTUS is willing to open itself to in the interest of tightening its leash on American women is completely, batshit crazy.

But wait. There’s more. Now that SCOTUS has decided that companies/people (because corporations are apparently more human than women) can pick and choose which parts of a law they abide by based on their religious convictions, all of the laws have the potential to become piecemeal and sort of meaningless.

Everyone, potentially, can become a law book unto themselves. Don’t like this new bill? No problem! Say it conflicts with your religion, and you can opt right out. This defeats the purpose of law entirely — which is, presumably, to protect the people with a set of rules that are established for the common good.

There is no common good anymore, and there is no protection. Your employer thinks you’re a slut who shouldn’t be sleeping around? Too bad for you, love. He can limit your choices and circumscribe your life, and you get no say in the matter.

At this moment, the United States is as politically polarized as it was during the Civil War. Secularist, social-safety-net-supporting liberals and religious, anti-tax conservatives are at war right now. This Hobby Lobby decision is just another case in which the battle field is women’s bodies.

So let’s fight this bullshit war, folks. If you believe that women should have affordable access to birth control, join me and Planned Parenthood by telling SCOTUS just how you feel.

We want control over our own bodies and our own lives. Fuck anyone who gets in our way.