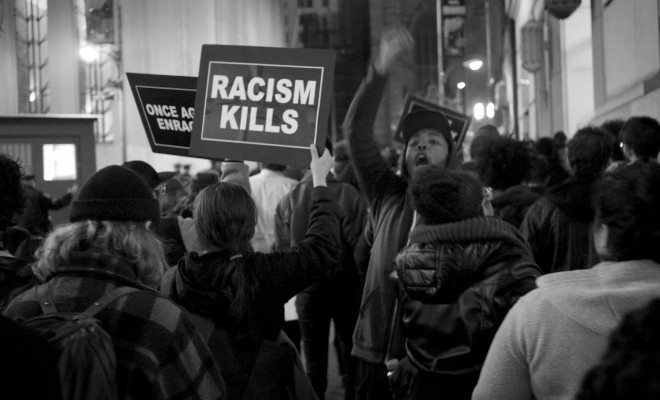 Racism: It’s on All of Us

Racism still exists in America. I see it every day, and having the increasingly common experience of being a white minority in the city I live in, I know that racism is not merely restricted to Caucasians. Yeah, I said it. Every race can be racist. Every race has stereotypes associated with other ethnicities, and every race has prejudices against those ethnicities based on years of perceived oppression. It does not matter if you are Caucasian, African, Asian, Mexican, or South American–you have experienced racism at some point in your life.

But the race issue is exacerbated by the media and by those who think racism is simply one-sided, i.e. white against every other color. Which is why cases like what happened in Ferguson, frankly, piss me off.

I agree that police officers should be held accountable their actions, and my thoughts are with Michael Brown’s parents, as no one should have to lose a child. But as their story spread and grew it became less and less about a cop shooting an 18 year old 12 times and more about a white man shooting a black man. Thieves and looters, under the guise of “protest” took the opportunity the media gave them and began destroying property, stealing, becoming physically violent toward police officers and each other, all in the name of justice for a black teenager. The protests fueled the media frenzy and the whole cycle repeated and blew up.

Again, Brown’s actions in the surveillance video above, which was taken from just prior to him being killed, do not justify him getting shot a dozen times. But painting him–as some stories did–as a martyr and a saint is a serious over-exaggeration. Yet citizens of Ferguson took the race part of the story–not the legal part–and made him their mascot.

We will never know for certain what happened that day after Brown left the store. What I can assume, though, is that if the officer responsible had been African American, we would not have heard about it. If Officer Darren Wilson and Michael Brown had both been white, we would not have heard about it. Had the races been reversed–black officer shoots white teen–you can bet shit would have hit the fan just the same.

The truth is, according to the 2013 FBI Crime Report: 83 percent of white homicide victims were killed by other whites. Ninety percent of black homicide victims were killed by other blacks. We don’t hear about those cases. The reason this homicide got so much attention? Race. Plain and simple. It would have been more understandable if the news and the protests had focused on a cop abusing his power, but that is not the story we got. Police officers, historically, have often gotten away with things that would have been illegal for regular citizens, regardless of race. Why couldn’t the news have focused on that injustice?

Michael Brown’s story got blown out of proportion. Criminals used his name as an excuse for heinous acts, we were hounded for months with news stories focusing on never-ending protests of criminal behavior, and his parents were left to mourn by dealing with the violence committed in their son’s name. Violence they did not and do not condone. All this because the police officer happened to be white.

Morgan McMurray
Morgan McMurray is an editor and gender equality blogger based in Seattle, Washington. A 2013 graduate of Iowa State University, she has a Bachelor of Arts in English, Journalism, and International Studies. She spends her free time writing, reading, teaching dance classes, and binge-watching Netflix. Contact Morgan at staff@LawStreetMedia.com.
Share:
Related ItemsDarren WilsonFergusonHomicideMediaMichael BrownMissouriProtestRaceRacismRacistSt. Louis