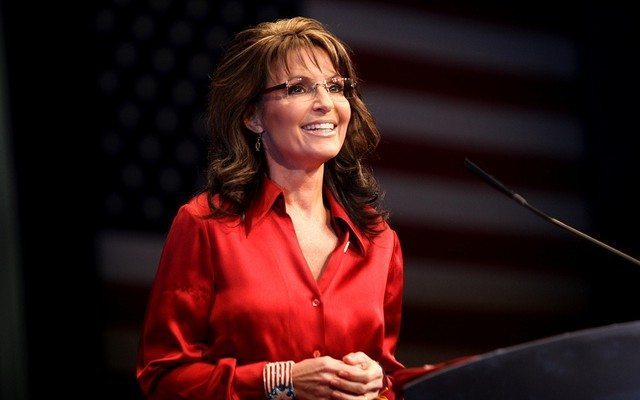 Can We Maybe Not Condone Torture, Sarah Palin?

The NRA Convention happened last weekend, folks! And you know what that means.

LOTS of ridiculousness for us to talk about.

Specifically, the ridiculousness that Sarah Palin was spewing. When she addressed the cheering crowd of gun enthusiasts, she made a wildly offensive comment equating torture with Christian indoctrination.

“They obviously have information on plots to carry out jihad. Oh, but you can’t offend them. You can’t make them feel uncomfortable. Not even a smidgen. Well, if I were in charge, they would know that waterboarding is how we baptize terrorists.”

Oh sure, Sarah, that’s great. Let’s torture people and call it baptism. Because that’s not problematic AT ALL.

A lot of people, conservatives included, are pretty scandalized by this latest sound bite from the Conservative Queen of Ridiculous Sound Bites. She’s talked nonsense about President Obama being a socialist, plotting to plunge the U.S. into a quagmire of evil Communism. She’s said some weird and totally untrue things about death panels being a part of the Affordable Care Act. Not to mention, she’s been unable to pinpoint any specific news publications that she reads, or to be completely in control of the English language — “refudiate” and “misunderestimate” are cases in point.

But! Despite the fact that we should all be totally used to Sarah Palin spewing nonsense, she really outdid herself this time.

Even Lucy is shocked.

Let’s start with the most glaring and obvious issue here — Palin is talking about TORTURE. This isn’t an enhanced interrogation method. This isn’t even fucking legal.

And she’s talking about it pretty fucking brazenly. She’s blasé about it, really. Palin talks about torturing people with the same folksy, nonchalant charm that won her a spot on the presidential ticket back in 2008. She could be talking about her kid’s hockey game, for cryin’ out loud.

But she’s not. She’s talking about subjecting human beings to the experience of simulated drowning.

And that’s really disturbing. When a person can talk about torturing other people with such ease, it makes you wonder what they’re really capable of. And I’m not the only one who’s wondering.

The Atlantic’s Conor Friedersdorf brings up an important point—what happens if the wrong Republican gets elected? Will the United States revert back to its Bush Era, barbaric ways? Will torture become the norm once again? What else will become the norm?

Potentially, a lot of scary things. Keep in mind, Palin is a self-professed, devout Christian. She’s a woman who claims to follow the gospel of Jesus Christ — a prophet who preached peace and love above all else. I mean, let’s be real. Dude was the original hippy, am I right?

So if she can justify torture — even when she follows a religion that, at its core, preaches peace — what else can she justify?

For starters, she can justify a blatant disrespect for the religion that she claims to cling to so tightly. Her conflation of waterboarding with baptism has been received with a lot of insult and outrage by many in the Christian community. Rod Dreher, the editor of the American Conservative, even termed the comparison “sacrilegious.”

So what are we left with? Sarah Palin has proven herself time and time again to be a lightning rod for controversy. She says crazy things. She does weird shit like deviate from her political career to star on reality shows. She gets a lot of flak.

And some of that flak isn’t well deserved. There’s always been an element of misogyny to the criticism hurled at Palin. The world collectively freaked out when she was announced as John McCain’s running mate back in 2008 — and not because she was wildly unqualified — but because she was a woman, a former beauty queen, a mother of five children. How can she be a heartbeat away from the presidency, the country asked, but not always for the right reasons.

But now? We’re left with a woman who talks about violence with reckless abandon. Who preaches her own religious and political views dogmatically, without actually following them herself. Who panders to crowds of gun-enthusiasts who cheer her on when she talks about torture.

That shit’s dangerous. So what’ll happen if the wrong Republican gets elected?

It’s impossible to say — but one thing’s for sure. Nothing good happens when you give people with a penchant for violence and self-righteousness the keys to the kingdom.

Hannah R. Winsten
Hannah R. Winsten is a freelance copywriter, marketing consultant, and blogger living in New York’s sixth borough. She hates tweeting but does it anyway. She aspires to be the next Rachel Maddow. Contact Hannah at staff@LawStreetMedia.com.
Share:
Related ItemsChristianityConservatismConservativesFeminismGun LobbyJesusJesus ChristNRARight WingSarah PalinTortureWaterboardingWomen