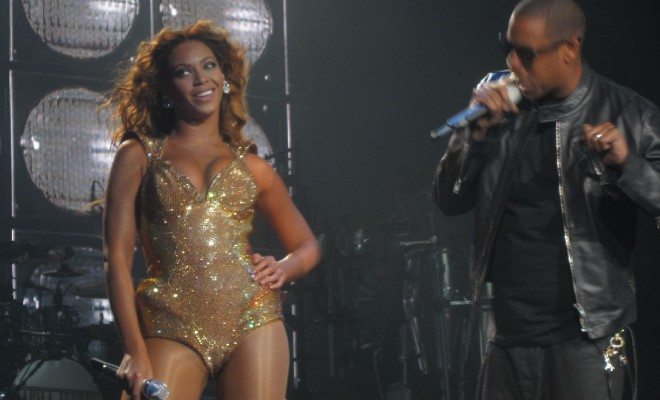 So, how many of you caught the Grammy Awards this weekend?

If you missed it, you should totally check out the recap post I wrote yesterday. It was a pretty epic night, complete with a weird Taylor Swift head banging incident and Daft Punk robot love.

But! The highlight of this year’s Grammys was definitely, without a doubt, Beyoncé and Jay Z’s “Drunk in Love” duet. It was so sexy. How sexy?

This performance isn’t notable just because all of us felt a universal need to go take a cold shower after watching it. As Alyssa Rosenberg points out on Think Progress, it’s also got a political edge to it.

Folks, Mr. and Mrs. Carter are proving that marriage can be awesome.

Now, I’ve written before about how the institution of marriage can be super problematic. It’s historically rooted in the buying and selling of women — complete with name changes to indicate the changing hands of property owners — and while it’s a different animal now here in the U.S., it’s still a source of major oppression. Spousal abuse and domestic violence still run rampant, women are still disproportionately responsible for the second or third shift of child rearing and housekeeping, and of course, there’s that nasty beast called monogamy. It’s got a shit reputation for making people feel trapped and unfulfilled — assuming they’re even sticking to it.

So, yeah. Marriage can be a bum deal. Which is why divorce rates are depressingly high, marriage rates are tellingly low, and movies like Runaway Bride are so goddamn relatable.

And that’s a problem for the political Right. They’d like to sell marriage all day — the heterosexual, monogamous kind, at least. For the conservatives, marriage is the ideal. The goal we’re all working toward. The bitter end.

But wait — isn’t that the Left’s view as well? Honestly, pretty much. One night stands and extended bachelorhood might be glorified on TV (Barney Stinson, anyone?), but really, even How I Met Your Mother’s ultimate single guy tied the knot eventually. Politically, the Left is all about marriage as well.

I mean, really, who are we kidding? The movement for gay rights has been a movement for gay marriage rights. Even the queers, who are supposed to be little unicorns of unconventional-relationship-forming light, are obsessed with marriage these days. It’s just reality.

So, when Jay Z and Beyoncé — two ridiculously hot, successful people who just happen to be married to one another — take the stage at the Grammys and give the single sexiest performance ever in the history of the world, we all have to sit up and pay attention.

Because it’s like a collective light bulb just went off. Aha! This is what marriage can look like.

Over at Think Progress, Alyssa argued that the Carters’ performance could be a major asset for the Right, if mobilized correctly. Conservatives could sell marriage licenses faster than hotcakes if they hired Bey and Jay to be their spokesmodels.

But I’d like to take it one step further. Sure, the Carters could sell a traditional marriage ideal for the Right — except, they don’t fit into it themselves. The conservative marriage model is dreary and Puritanical. It takes a Calvinist attitude to relationships — it’s hard work, and not much play. It’s a commitment between partners and helpmates, not so much a joyful companionship.

And I’m sorry, but who really wants in on that? Not Beyoncé and Jay Z. Definitely not.

So, instead of serving as a sales pitch for the political Right, I think the Carters are offering a radical redefinition of marriage.

Here are two people who have actual fun together. Who respect each other. Who actively resist racist and sexist norms built into the marriage model. (Did you know that they both changed their names upon legalizing? Jay Z’s an awesome feminist husband and I love him.) These are two separate and independent people, and they’ve come together not because they need each other, but because they want one another.

So, with that, here’s the full video of Beyoncé and Jay Z totally owning the Grammys.

Now that’s a marriage I wouldn’t mind being in.

Hannah R. Winsten
Hannah R. Winsten is a freelance copywriter, marketing consultant, and blogger living in New York’s sixth borough. She hates tweeting but does it anyway. She aspires to be the next Rachel Maddow. Contact Hannah at staff@LawStreetMedia.com.
Share:
Related ItemsBeyonceConservatismFeminismFeministGrammy AwardsGrammysJay ZMarriageWomen