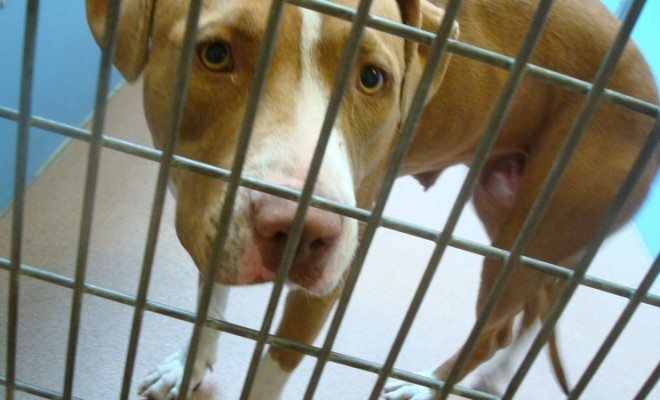 Just last week a fellow Law Streeter, Ashley Shaw, wrote a really great piece about animal rights in our judicial system. It was fun and informative so you all should definitely go check it out! Just a few days ago I came across an article about abused pit bulls in Delaware getting second chance thanks to a recent law signed by Governor Jack Markell.

I am a serious animal lover. I have four dogs and a fifth has stolen my heart (the boyfriend’s dog). One of my four dogs is a Pit Bull and Border Collie mix named Melou. She is a happy-go-lucky dog that likes to play in the yard and bark at everything that walks past our house. She can also be very territorial but in a good way, just like any other dog she is protecting her home. She has the aggressiveness of a Pit Bull and the herding skills of a Border Collie. Though she may have the not-so-great characteristics of both breeds, she also has a mixture of the great things. She is extremely playful and loving, and she can be overly aggressive when it comes to play time with other larger dogs, but it’s just because she loves to play. I have a friend who has a Pit Bull and Weimaraner mix, Dexter, that is massive and several years younger than Melou but they play well together.

It was heartwarming to read that Governor Jack Markell (D) signed Senate Bill 245 into law last week. This new law will allow seized dogs from fighting situations, mostly Pit Bulls, to be individually evaluated to see if they have a chance at being adoptable pets. Before Senate Bill 245 was enacted all dogs that were seized from fighting situations were deemed dangerous and immediately euthanized, including puppies and pregnant females.

It is unfair to classify all Pit Bulls as scary, aggressive dogs. Did you know it is actually illegal to own a Pit Bull in Miami-Dade County? Miami-Dade can actually fine the owner and forcibly remove the dog from his home. How unfair is that? I understand that Pit Bulls have a reputation of being overly aggressive and all-around scary, but anyone who has ever encountered or owned a Pit Bull knows that it is simply not universally true. Yes, these dogs can be trained to kill one another and to attack anyone but so can any other dog. Mind you it would be hard for a Chihuahua to kill a person because of how tiny it is, but any dog can be trained to do harm. It all depends on how it is raised.

Pit Bulls are very loyal, friendly, and full of energy — the best kind of family dog to have! Melou is sweeter to people who come over to my house than my little Chihuahua who gets overly aggressive, barks, and growls at everyone except certain family members.

There are only 13 states left that still support euthanizing all fighting dogs without really taking a look at them. The state of Michigan recently introduced Senate Bill 990, which calls for a change similar to the one made in Delaware. Even in 2011 the American Bar Association called for legislative and governmental bodies to “ensure the humane treatment and disposition of seized dogs.”

Thanks to Michael Vick and his pals, the American people were able to get a better understanding of the horrific side of dog fighting and take a stand against something so heinous. Vick’s situation also opened the door of rehabilitating used and abused dogs, which showed the world that even damaged Pit Bulls can become loving animals.

Allison Dawson
Allison Dawson was born in Germany and raised in Mississippi and Texas. A graduate of Texas Tech University and Arizona State University, she’s currently dedicating her life to studying for the LSAT. Twitter junkie. Conservative. Get in touch with Allison at staff@LawStreetMedia.com.
Share:
Related ItemsAnimal RightsDelawareEuthanizedFighting DogsGovernor Jack MarkellMichael VickMichiganPit Bull