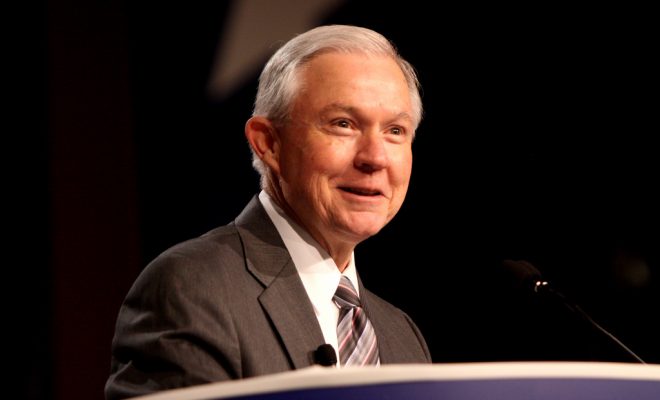 It is accepted wisdom at this point that Attorney General Jeff Sessions is no fan of marijuana, including in its medicinal capacity. He is adamant that “good people don’t smoke marijuana.” He recently compared medical marijuana, which has never led to an overdose death, to opioids, which kill nearly a hundred Americans each day.

I believe it would be unwise for Congress to restrict the discretion of the Department to fund particular prosecutions, particularly in the midst of an historic drug epidemic and potentially long-term uptick in violent crime. The Department must be in a position to use all laws available to combat the transnational drug organizations and dangerous drug traffickers who threaten American lives.

Sessions is referring to the Rohrabacher-Farr Amendment, a budget rider, introduced in 2014, that prevents the Justice Department from allocating funds to press cases against medical marijuana actors in states that have legalized cannabis for medicinal purposes. The amendment was included in the Fiscal Year 2017 omnibus spending bill, which passed early last month, states:

None of the funds made available in this Act to the Department of Justice may be used […] to prevent any of them from implementing their own laws that authorize the use, distribution, possession, or cultivation of medical marijuana.

Though the spending bill, which will fund the government until October 1, included the amendment, it is unclear whether it will make the next one. In the letter, which was provided to MassRoots by a congressional staffer, Sessions argues that the amendment prevents the DOJ from cracking down on gangs that operate in states where medical marijuana is lawful.

The Obama Administration was no fan of the amendment either. For one, the Justice Department lobbied Congress to strike down the provision in 2014, arguing that it might “limit or possibly eliminate the Department’s ability to enforce federal law in recreational marijuana cases as well.” And even after the amendment passed, the administration still managed to prosecute individuals and organizations in states where medical marijuana had been legalized.

Representatives Dana Rohrabacher (R-CA) and Sam Farr (D-CA) responded by writing a letter to DOJ Inspector General Michael Horowitz, saying the administration’s interpretation of the amendment “clearly is a stretch.” They added:

The implementation of state law is carried out by individuals and businesses as the state authorizes them to do. For DOJ to argue otherwise is a tortuous twisting of the text of [the provision] and common sense and the use of federal funds to prevent these individuals and businesses from acting in accordance with state law is clearly in violation of Rohrabacher-Farr.

If the Sessions-led Justice Department takes a similar tactic as the previous administration, it will certainly be hearing from Rohrabacher and Farr.