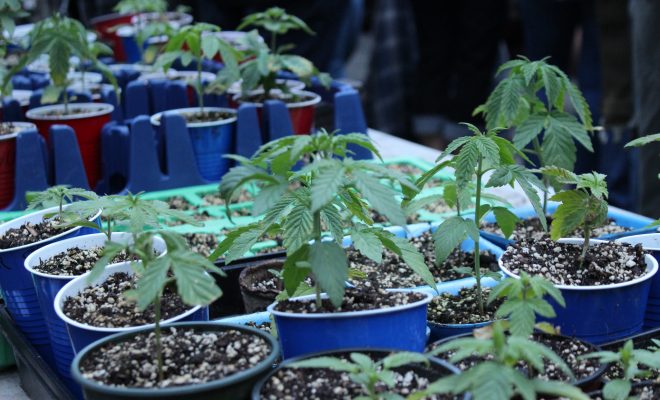 A laser light show. Painting parties. Rattlesnakes and lizards. The 2016 Oregon State Fair is a diverse affair, set to feature the aforementioned activities and reptiles. And for the first time ever at an American state fair, according to its organizers, there will be an exhibit displaying live marijuana plants, with leaves but no buds. The exhibit is focused on promoting pot cultivation techniques. “It’s not to tempt people to use marijuana,” Donald Morse, executive director of the Oregon Cannabis Business Council and the exhibit’s organizer, told ABC. “It is to educate. Cannabis is Oregon’s newest farm crop.”

Oregon voted to legalize recreational marijuana in November 2014. It’s one of four states plus the District of Columbia to legalize the drug. State fairs are communal gatherings, where the latest in food and culture is often showcased side-by-side with local traditions. A public cannabis exhibit represents an important milestone in erasing the long-held stigma associated with pot since the days of “Reefer Madness.” This year’s exhibit is the logical next step from last year’s fair, which had marijuana information booths. A positive response from fairgoers last year allowed for live plants to be displayed this year, Morse said.

Nine plants will feature at the fair, which begins on Friday in Salem, a city 50 miles south of Portland. Selected from a cannabis competition last weekend, the nine winning plants will evenly be split between sativa, indica, and a hybrid of the two varieties. Sativa and indica are two major species of the cannabis plant, distinguished by the appearance of their leaves and their psychological effects.

The Oregon Liquor Control Commission is still tweaking the state’s regulations regarding marijuana cultivation, transportation, and consumption. A spokesman said the commission hopes to have licensing laws and regulations finalized by 2017. The current code allows people to grow four pot plants in their private residence. But because a flowering plant–one with buds–is illegal to transport, the plants at the fair will be budless. Dan Cox, a spokesman for the fair, said the marijuana exhibit fits right into the ethos of his state’s annual event: “It is a showcase for traditional things. And yet it’s always been a showplace for the new, the different, and the innovative,” he said.

Alec Siegel
Alec Siegel is a staff writer at Law Street Media. When he’s not working at Law Street he’s either cooking a mediocre tofu dish or enjoying a run in the woods. His passions include: gooey chocolate chips, black coffee, mountains, the Animal Kingdom in general, and John Lennon. Baklava is his achilles heel. Contact Alec at ASiegel@LawStreetMedia.com.
Share:
Related ItemsCannabis in AmericaIndicaLegalized MarijuanaMarijuanaOregonOregon State FairPotSativaweed