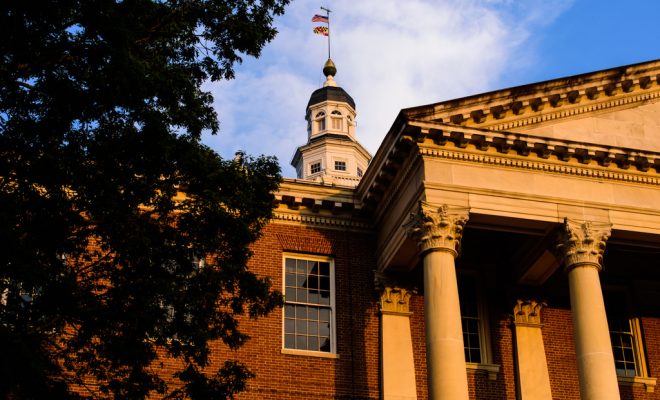 Will Maryland be the Next State to Legalize Recreational Marijuana?

Maryland might be the next state to legalize recreational marijuana. During a news conference on Monday, a trio of Democratic lawmakers said they would introduce two pieces of legislation: one to tax recreational marijuana sales, and another to regulate a legal market. But some Maryland Democrats would like to see the state iron out its medical marijuana program before tackling recreational use.

The bills propose regulating and taxing marijuana like alcohol is regulated and taxed: use would be permitted for adults 21 and up, and it would be illegal to consume marijuana in public. Cultivators would pay a $30 per ounce excise tax, and there would be a nine percent sales tax levied on retail products.

“This legislation will effectively end the failed policy of cannabis prohibition in Maryland and replace it with a much more sensible system,” said Sen. Richard Madaleno (D-Montgomery), one of the sponsors of the bills. “It establishes a thoughtful regulatory scheme and tax structure based on best practices and lessons learned from other states.”

The proposed regulatory framework is modeled after Colorado, which legalized recreational marijuana in 2012. Revenue from the taxes would funnel into community school programs, substance abuse treatment and prevention programs, and workforce development programs. Maryland has been slowly creeping toward full legalization since 2013, when the state legalized medical marijuana.

The state’s medical program was deliberated on for nearly three years: permits were finally issued to growers, processors, and dispensaries in 2016. But after lawsuits and complaints about how the permits were issued, medical marijuana patients in Maryland will not have access to the drug until sometime this year. Until the medical program is fully implemented, some lawmakers and activists say, recreational legislation should not be put forward.

“We need to get the medical marijuana program up and running before we move to full-blown legalization,” Del. Cheryl D. Glenn (D-Baltimore) told The Washington Post. But according to a poll from last fall, most Marylanders (61 percent) support legalizing recreational marijuana, up from 49 percent in 2014.

Del. David Moon (D-Montgomery) is introducing separate legislation that would allow voters in 2018 to determine if the state’s constitution should be changed to legalize marijuana. In order to end up on the 2018 ballot, a constitutional amendment would need to garner a two-thirds majority vote in the legislature. Moon is confident that, somehow, Maryland will legalize recreational marijuana. “You can smell the inevitability of this in the air,” he said.

Alec Siegel
Alec Siegel is a staff writer at Law Street Media. When he’s not working at Law Street he’s either cooking a mediocre tofu dish or enjoying a run in the woods. His passions include: gooey chocolate chips, black coffee, mountains, the Animal Kingdom in general, and John Lennon. Baklava is his achilles heel. Contact Alec at ASiegel@LawStreetMedia.com.
Share:
Related ItemsCannabis in AmericaConstitutional AmendmentMarylandMedical MarijuanaRecreational Marijuana