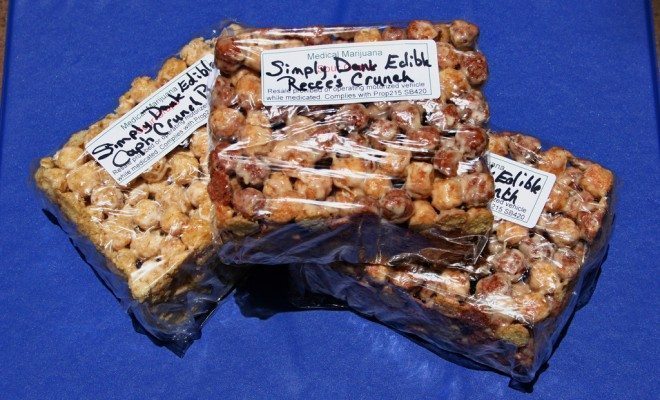 On New Year’s Day 2014, it became legal in Colorado to sell marijuana in specially licensed dispensaries to adults 21 years and older. Much like any liquor store, you can walk in, show your ID, and make your purchase. But the dispensaries don’t just sell marijuana you smoke; you can also buy edibles, as well–marijuana you eat. As a newly legal product, the state was in uncharted territory. As we fast forward a little more than a year later, what are the state regulations on edibles, what effects have the sale of edibles had, and are other states following suit?

What is edible Marijuana?

Cannabis, or marijuana, has three primary active compounds: THC, CBD, and CBG. THC is the only psychoactive ingredient. CBD and CBG have medicinal properties and alter the effects of THC. The drug reacts with the body’s endocannabinoid system, a “regulatory mechanism that modulates the release of compounds produced throughout the body,” and causes humans to experience a high. Marijuana can be vaporized, smoked, or consumed orally.

When marijuana is smoked or vaporized, delta-9-THC is absorbed through the lungs and heads straight to the brain. The onset high is relatively quicker and shorter than if marijuana is eaten. When the marijuana is consumed and digested by the liver, the delta-9-THC turns into 11-hydroxy-THC. The transformation causes the THC to quickly bypass the blood-brain barrier and produce a more psychedelic effect than smoked THC. Smoked and vaporized marijuana completely sidestep the liver and the THC never converts.

While the high from smoking marijuana is faster, edible highs last longer. When smoking marijuana, 50 to 60 percent of the THC in a joint can reach the blood plasma. The peak of the high can come after five to 10 minutes of smoking. In comparison, only ten to 20 percent of the THC in edibles hit the blood plasma and the high takes effect an hour or two later. The high from edible marijuana is described as a “whole body” high and can last from six to ten hours. Essentially, people experience the highs from smoking eating marijuana differently.

Why would someone choose edibles over smoking?

Although the high from edibles lasts longer, it isn’t necessarily stronger. The high from smoking is rapid and strong, and the effects wear off rather quickly. It is also relatively easy to know when you’ve reached a limit since the high is so immediate. One answer could be personal choice–some people prefer the experience of edibles. Edibles could also alleviate any problems a person has with consuming smoke, and coughing fits are essentially eliminated.

Also, edibles are inconspicuous. A person eating won’t invite attention the way someone smoking will. This is probably most important to medicinal marijuana patients. Amanda Reiman, policy manager of the California Drug Policy Alliance, explains that “people using marijuana medicinally for long-lasting chronic pain often prefer oral ingestion because it lasts longer and they don’t have to consume as often.” Bob Eschino, a partner at Medically Correct, says “They’re discreet, and it’s an easy way to dose the medication…especially here in Colorado, where you can’t smoke in public, you can still medicate with edibles.”

The sky seems to be the limit. Marijuana comes in the form of cookies, gummies, brownies, caramels, hard candies, chocolate bars, Rice Krispies treats, and beyond. Colorado dispensaries estimate edibles account for 20-40 percent of sales. Nearly five million edibles were sold in Colorado in 2014. For example, Dixie Elixirs, a popular cannabis products store, sold THC-infused mints, truffles, dew drops, whipped cream, coffee, and tea all in a variety of flavors. There are plenty of companies getting onboard. In an interview just this past February, Ben Cohen and Jerry Greenfield of Ben & Jerry’s Ice Cream even stated they would experiment with cannabis-infused ice cream if legal hurdles were removed.

A major issue when ingesting marijuana is a person’s inability to predict the right amount to take. In order to receive the intended effect, there are many factors to take into consideration. Dosage is based on the type of marijuana, tolerance, body weight, gender, body chemistry, and more. The issue is further exacerbated by the fact that an edible’s effect can take an hour to two hours to reach its height. This prompts impatient people to ingest more.

The Cannabist, which seeks to educate readers about marijuana, recommends the following steps to be safe. First, a user must acknowledge his or her drug history and tolerance and recognize body factors like body type and gender when ascertaining the proper dosage. Also, it’s recommended when eating an edible to have a full stomach or to do so while also consuming food. Next, a user should measure by milligrams. A unit is generally ten milligrams of cannabinoids. A user should stick to a brand that works for him after lightly experimenting with a variety. Be patient, and cautious.

Controversy arose after a string of tragic incidents occurred involving edible marijuana. Levy Thamba, a Wyoming college student, committed suicide by jumping from a hotel balcony after eating an entire marijuana-infused cookie. The recommend dosage was probably only a portion of that cookie. Lack of portion control knowledge is a problem. Al Bronstein, a physician and medical director of the Rocky Mountain Poison and Drug Center, explains “[portion control is] difficult to do, practically. I know, myself: I wish I could only eat one-eighth of a Snickers bar and leave the rest for later.” Another concern is that consumers don’t realize that ten milligrams refers to one-tenth of a candy bar, for example, as opposed to the entire thing.

Another major concern is children accidentally ingesting edibles that look like their non-marijuana-infused counterparts. According to a 2013 JAMA Pediatrics study, Children’s Hospital Colorado saw a “significant spike in the number of children treated for accidentally eating marijuana-laced treats” after the new marijuana-based laws were set in place. In one month, three seventh graders were hospitalized after ingesting marijuana-infused brownies.

Stricter laws and regulations in Colorado went into effect on February 1, 2015 aimed at standardizing the labeling, packaging, and potency of edibles.

The recommend amount to take is one unit or ten milligrams. According to the new law, to avoid any consumer confusion, the serving portion must be transparently clear and marked “in a way that enables a reasonable person to intuitively determine how much of the product constitutes a single serving of active THC.” For example, Dixie Elixir’s marijuana-infused mints used to come in a loose tin of ten, with ten milligrams of THC each. They are now wrapped individually and sold at 16 mints of five milligrams apiece.

Packaging must now be child-resistant. Packages must be “constructed to be significantly difficult for children under five years of age to open…opaque so that the packaging does not allow the product to be seen without opening the packaging material…[and] resealable for any product intended for more than a single use.”

Labels must be more informative and give clear warning signs such as “This product is unlawful outside the State of Colorado” and/or “The intoxicating effects of this product may be delayed by two or more hours.” This specifically targets overdoses caused by impatience and overconsumption while a user is waiting for the drug to take effect.

Marijuana is still prohibited under federal law. This means you can still be fired for recreational use, and it can also lead to the loss of benefits, public housing, and financial aid.

Driving under the influence of marijuana will always be illegal, like alcohol. In Colorado, you can transport an unopened original package, but never across state lines. It is also forbidden to fly with marijuana even if you are traveling to another state with legalized marijuana.

You can obtain marijuana from a licensed dispensary or another adult over 21 as long as no money is exchanged. It is illegal to sell or resell any marijuana.

Alaska and Washington have also legalized marijuana for adult use with similar regulations. Washington D.C. and Oregon are following suit, but certain aspects of regulation have yet to go into effect. A total of 23 states allow marijuana for medical necessity.

Education and clear information are both vital. The tragedies surrounding edible marijuana seem like they most likely could have been avoided if these regulations were initially set in place, but it is hard to say for sure. Legalized marijuana, including edibles and other products, remains a new territory. New consumers need to learn what is safe and right for them as a learning curve is involved. If you are going to try it, it is important to be as informed as possible and in a safe environment. In the future, additional states may follow suit and legalize marijuana, and these questions will remain essential to keeping everyone as safe as possible.

ABC News: Why Marijuana Edibles Might Be More Dangerous Than Smoking

Cannabist: Get Educated About Edibles: Eight Tips For Getting the Right Dose

BoingBoing: Everything You Need to Know about Marijuana Edibles

Jessica McLaughlin
Jessica McLaughlin is a graduate of the University of Maryland with a degree in English Literature and Spanish. She works in the publishing industry and recently moved back to the DC area after living in NYC. Contact Jessica at staff@LawStreetMedia.com.
Share:
Related ItemsAlaskaCannabisColoradoEdiblesMarijuanaMedical MarijuanaOregonPotWashingtonWashington DCweed