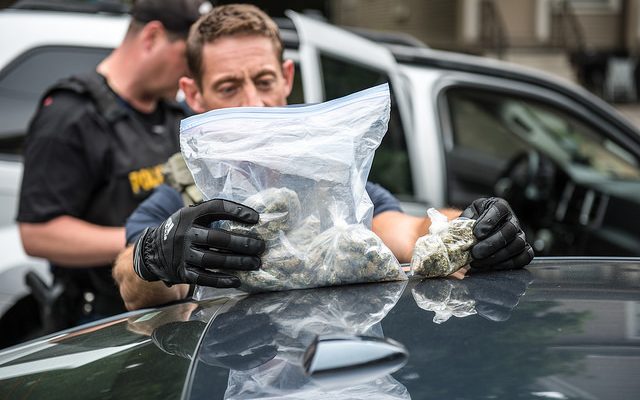 Image Courtesy of [Office of Public Affairs via Flickr]

Arrests for small amounts of marijuana outnumbered arrests for all violent crimes combined last year, according to a new report released Wednesday by the American Civil Liberties Union and Human Rights Watch highlighting the abundance of drug possession crimes in America.

The 196-page report title “Every 25 Seconds: The Human Toll of Criminalizing Drug Use in the United States,” found that every 25 seconds in the U.S., someone is arrested possessing drugs for their personal use, and on any given day 137,000 men and women are behind bars in the U.S. for drug possession. In fact, one in nine arrests are for drug possession, amounting to over 1.25 million each year.

Interestingly enough, many of these people haven’t yet been convicted of a crime, but are being detained pretrial because they can’t afford to post bail–leading many defendants to “plead guilty simply to secure their release, in cases where they might otherwise want to go to trial.”

As a result, these convictions exclude them from job opportunities, public housing, quality education, welfare assistance, voting, and more, and subject them to discrimination and lifelong stigma.

“Rather than promoting health, criminalization can create new barriers to health for those who use drugs,” the report says. “Criminalization drives drug use underground; it discourages access to emergency medicine, overdose prevention services, and risk-reducing practices such as syringe exchanges.”

The authors of the report call for drug use to be treated as a public health issue, rather than a criminal issue. The report says:

Ending criminalization of simple drug possession does not mean turning a blind eye to the misery that drug dependence can cause in the lives of those who use and of their families. On the contrary, it requires a more direct focus on effective measures to prevent problematic drug use, reduce the harms associated with it, and support those who struggle with dependence. Ultimately, the criminal law does not achieve these important ends, and causes additional harm and loss instead. It is time for the US to rethink its approach to drug use.

Proponents of strict drug-use penalties argue that tough sentencing practices can deter use and will keep the public safe. For instance, since 1979, illegal drug use by children age 12 and up was at its highest rate in 2015, at just under 18 percent. That rate was much lower at the peak of drug-related arrests in the mid 2000s, but the full picture is much murkier than just that blip in time.

The report also found that while whites are more likely to use illicit drugs in general, black adults are more than two-and-a-half times as likely as white adults to be arrested for drug possession–furthering problems of racial discrimination.

Alec Siegel
Alec Siegel is a staff writer at Law Street Media. When he’s not working at Law Street he’s either cooking a mediocre tofu dish or enjoying a run in the woods. His passions include: gooey chocolate chips, black coffee, mountains, the Animal Kingdom in general, and John Lennon. Baklava is his achilles heel. Contact Alec at ASiegel@LawStreetMedia.com.
Share:
Related ItemsACLUCannabisCrimeDrug CrimesHuman Rights WatchMarijuanaNon-Violent CrimesWar on Drugs