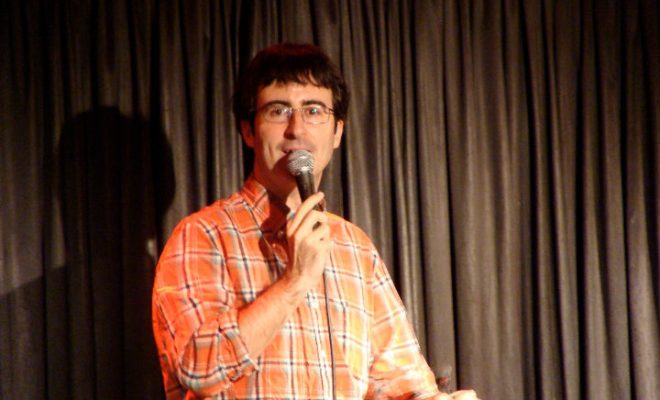 In Sunday’s episode of “Last Week Tonight with John Oliver,” the comedian delved into the twisted, backward world of America’s marijuana laws, a topic that is “genuinely worth worrying about,” he said. Over the course of 16 minutes, Oliver gave a brief marijuana history lesson–featuring Richard Nixon in rare form–and plucked some present-day examples of people whom the country’s contradictory laws affect.

Oliver began with a brief historical overview of how marijuana laws have evolved since the War on Drugs, launched in the 1970s by Nixon, or “the Mozart of racially motivated lawmaking,” as Oliver calls him. The comedian pulled up an audio recording of Nixon talking about the perpetrators behind the marijuana legalization effort:

You know it’s a funny thing, every one of the bastards that are out for legalizing marijuana is Jewish. What the Christ is the matter with the Jews… I suppose it’s because most of them are psychiatrists, you know, there’s so many, all the greatest psychiatrists are Jewish. By God we are going to hit the marijuana thing, and I want to hit it right square in the puss.

After skewering Nixon (and the uncanny similarities between his word choice and our current president’s), John Oliver delved deep into the issue. “If you have marijuana right now, even if you are acting completely legally according to your state, you may still be in serious jeopardy,” Oliver said, mentioning that 44 states have legalized medical marijuana in some form, and eight states and D.C. have legalized the drug for recreational use. But, he stressed, because of the federal ban on marijuana, unjust criminal penalties are common, and some perfectly legal businesses are forced to operate on a cash-only basis.

Due to the tension between state and the federal law when it comes to marijuana, dispensaries can sometimes be arbitrarily raided and minor infractions can result in jail time. Legal businesses like dispensaries are also handcuffed by the federal ban. Many banks won’t allow them to open accounts, which can force marijuana businesses to solely accept cash from patrons, pay their employees with cash-stuffed envelopes, and stash their profits in safes, a dangerous practice for any type of business. In addition, as Oliver noted, many marijuana business-owners are barred from taking federal tax deductions.

Oliver brought up the story of a man who had a legal medical marijuana card for his paralysis but was fired by his employer because he failed a drug test. Oliver compared the absurdity of the man’s story to “driving exactly the speed limit, and getting pulled over by a cop who tells you, ‘sorry, the federal speed limit is three, and the legal age to drive is 62, and also you have to be drunk.'”

A large chunk of the segment was dedicated to medical marijuana laws. Oliver took aim at the federal classification of marijuana as a Schedule I substance, which puts it on par with heroin and LSD. He also mentioned Danny Belcher, a veteran in Kentucky who was denied marijuana to treat his PTSD by the VA. Medical marijuana is legal in Kentucky, but because Belcher’s health care was administered by the VA, a federal department, doctors were unable to prescribe him marijuana.

“A doctor shouldn’t be ignored because he recommends marijuana,” Oliver quipped, pulling up pictures of Dr. Phil and Dr. OZ, “a doctor should only be ignored because he is televised.” Oliver also expressed concern over how Attorney General Jeff Sessions (“the concept of golf expressed in man form”) will enforce the federal ban. Sessions has stated “good people don’t smoke marijuana,” though he has said he will uphold the Cole Memo, which directs the Justice Department to prioritize state law over federal law in regard to marijuana.

Oliver concluded by calling for “sensible” reforms: “I’m not saying there shouldn’t be laws that place sensible restrictions on marijuana as there are with other substances, but our federal laws desperately need to be brought up to date.”

Alec Siegel
Alec Siegel is a staff writer at Law Street Media. When he’s not working at Law Street he’s either cooking a mediocre tofu dish or enjoying a run in the woods. His passions include: gooey chocolate chips, black coffee, mountains, the Animal Kingdom in general, and John Lennon. Baklava is his achilles heel. Contact Alec at ASiegel@LawStreetMedia.com.
Share:
Related ItemsCole MemoJeff SessionsJohn OliverMarijuana LegalizationMedical MarijuanaRichard NixonWar on Drugs