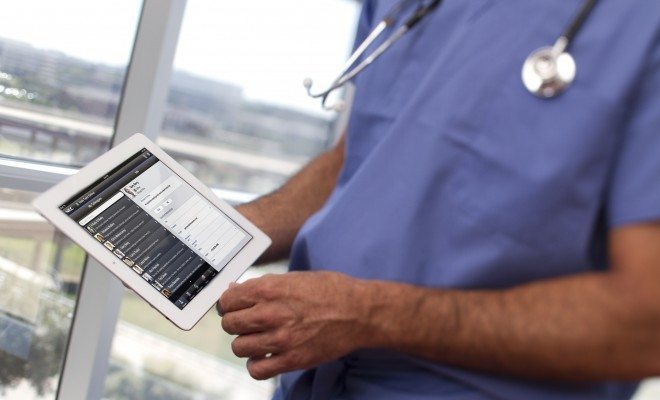 Image courtesy of [NEC Corporation of America via Flickr]

Many aspects of our lives have escaped the shackles of the real world and gone digital. Most of our music, movies, work files, and even financial data exist in digital and cloud-based worlds with no tangible counterparts. But the transition to the digital realm has been slow and laborious for the largest and possibly most important data set of all: health data. The health care system in the United States has proceeded towards digitization with prudent caution; a glitch in a digital health system means more than a corrupted music file, it could mean the difference between life and death.

It’s easy to get caught up in the vision of a completely digitized healthcare system. Faster and more effective treatments? Fewer forms to fill out? Massive data sets that could vastly improve public health? Who wouldn’t be excited? Most people believe in the benefits, but the digitization of health data involves much more than just desire and ability. Laws, protocols, and privacy concerns slow digitization efforts like well-placed speed bumps.

Here’s an overview of laws affecting health digitization, how some people innovate around them, and what’s coming up next for digital health.

Your own personal health information isn’t always just about you. A doctor can use your health data in two basic ways:

1. To treat you and only you. This is called primary use.

2. To inform broader public health decisions, including things like disease prevention. This is called secondary use.  For example, a University of Pittsburgh project called Project Tycho collected 88 million disease reports from the CDC’s Morbidity and Mortality weekly report and incorporated them into an open-access database. They use it to study the long term implications of interventions, like the polio vaccine, over long periods of time. In this video, the Dean of Pitt Public Health explains that the project is named after Tycho Brahe, a Danish astronomer who mapped stars and planets–data that Johannes Kepler eventually used to derive the laws of planetary motion. He hopes researchers can build on existing work to make groundbreaking discoveries in disease prevention.

Health data gets complicated in secondary use. Laws protect individual privacy and ensure doctors don’t compromise personal health data for the sake of public health or research goals. As the technology for sharing and collecting health data has improved, legal applications have become more complicated.

Overall, different federal and state laws layer on top of each other to create a legal framework that protects health data privacy. The centerpiece of this framework is the Health Information Portability and Accountability Act of 1996 (HIPAA).

The rule isn’t a nail in the coffin for the use of data in public health. Entities can use PHI without authorization for the prevention and control of disease, disability, or injury. The law also allows unauthorized use of PHI for matters of national security and for law enforcement activities. Working with these exemptions, public health entities can make brilliant use of PHI. For example, the University of Maryland Center for Substance Abuse Research’s National Drug Early Warning System supplements traditional health data with data found on social media tools to find patterns that indicate emerging drug trends and launches interventions to fight drug use.

The system is just one example of innovation in spite of laws that restrict health data use. But when it comes to innovation, the unregulated types of health data hold the most promise. Current laws do not cover information that is patient generated. Therefore, private companies and organizations have latched onto the idea of patient generated data and what it could mean for overall health.

People share a lot of other things online, why not something as important as health data? That’s the simple philosophy behind many new, and perfectly legal, tools that count on people to opt into sharing their health information for the greater good. With no regulations on the use of patient generated data, the research and preventative implications could be revolutionary.

Apple’s new initiative harnesses the research potential of the iPhone, which has sophisticated abilities to track actions and record information. It allows individuals to participate in studies through self-reports using their iPhones instead of traveling to research centers. It’s a goldmine of quantitative data possibilities for researchers trying to understand certain diseases as the ResearchKit framework opens up endless possibilities for accessing patients. Researchers simply build an app that suits their study and launch it.

Mount Sinai, Weill Cornell Medical College, and LifeMap already used ResearchKit to develop the Asthma Help app that allows them to understand what might be aggravating asthma symptoms. It incorporates GPS data from the phones with city air quality data to advise asthma patients of locations where their symptoms could be the worst.

This initiative doesn’t focus on collecting data, but dives into all of the data already being collected to determine what information has the potential to do the most good. According to the foundation, 40,000 health apps and wearable health devices already exist and produce a lot of useable data. They’re encouraging health professionals to look at data they already have in new ways.

This project prospects Facebook as a potential recruiting ground for genetic research participants. The project aims to have people send spit samples to a laboratory and then fill out periodic follow up questions via a Facebook app. The participants’ personal information would still be protected. The researchers chose Facebook because it grants the ability to potentially recruit a more massive amount of participants than usual. As the researchers try to understand how the interplay of genes and the environment influence disease, more data helps make more robust conclusions.

The government sees no reason for laws to limit innovation in the digitization of health care and has pushed out new programs that prove its commitment to digital efforts and information sharing.

In April, the HHS announced it would grant a million dollars to support community initiatives that promote the flow and sharing of health information. The money will support projects under what’s called the Community Interoperability Health Information Exchange (HIE) Program. The funds and the program will help the awardees use health information in effective, appropriate, and secure ways.

Additionally, the HHS also announced a new Federal Health IT Strategic Plan for 2015-2020. The plan tackles how to move forward in the collection, sharing, and use of health data in appropriate ways. The Nationwide Interoperability Roadmap came out in draft form this past January.

A successful learning system relies on an interoperable health IT system where information can be collected, shared, and used to improve health, facilitate research, and inform clinical outcomes. This Roadmap explains what we can do over the next three years to get there.

What can we learn about health on social media?

Some people choose to take health matters into their own hands and social media empowers them to do so. As data and information becomes more readily available through social tools, previously unknown advantages and disadvantages could emerge.

Most recently in Belgium, a man became frustrated with the long wait times necessary to find a kidney donor in the traditional fashion. He took to Facebook to tell his story and recruit his own donors. He found eight volunteers but ultimately doctors refused to perform the surgery because it would be unfair to other patients waiting for traditional donors. This case provides a glimpse into issues of equality that might arise if more people use social tools to their advantage. Can someone use social media tools to find themselves organ donors when others can’t access the tools or even computers?

Social media has also taught us that more data isn’t always better. Not too long ago, Mark Cuban, the Dallas Mavericks owner, tweeted that people should get quarterly blood-work so they can better track their own health.

Doctors responded by saying that doing just that could have dangerous consequences. More testing produces more false or incorrect results and reveals other fluke abnormalities. The abnormalities might lead to unnecessary treatment that comes with potentially harmful side effects. Some did admit that Cuban’s vision might be one for the future–where tests have improved and the average person is well versed in analyzing his or her own medical data.

The digitization of health care, whether done under HIPAA regulations or through open-source patient generated data, promises to usher in a new era of big data in health care that brings infinite possibilities for the health field. But more data does comes along with more complications. Will we be able to balance privacy with equality while actually using the data to our advantage? So far, we’re on the right track.

NPR: Tracking Your Own Health Data Too Closely Can Make You Sick

The Atlantic: Should Patients Be Able to Find Organ Donors on Facebook?

Buzzfeed: A New Facebook App Wants To Test Your DNA

Ashley Bell
Ashley Bell communicates about health and wellness every day as a non-profit Program Manager. She has a Bachelor’s degree in Business and Economics from the College of William and Mary, and loves to investigate what changes in healthy policy and research might mean for the future. Contact Ashley at staff@LawStreetMedia.com.
Share:
Related ItemsApple ResearchKitDoctor Patient ConfidentialityGenes For Good ProjectHealthcare DigitizationHIPAANational Early Drug Warning SystemPrivacyProject TychoRobert Wood Johnson Foundation Data for Health InitiativeSocial MediaTycho Brahe