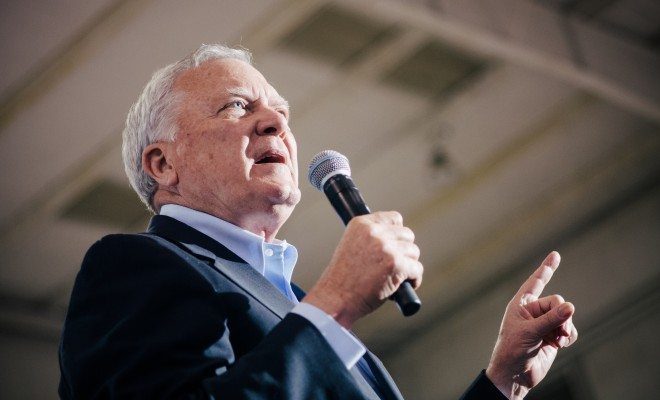 At a news conference on Monday, Georgia Governor Nathan Deal (R) announced his intention to veto a controversial bill that would provide certain protections to opponents of same-sex marriage. House Bill 757 would allow religious leaders, faith-based organizations, and businesses to exercise their freedom of religion and refuse to provide services to the LGBT community, as well as deny employment to LGBT individuals.

The bill was passed by Georgia Legislature earlier this month, but was rejected by the Governor, who stated Monday:

In light of our history, I find it ironic that today some in the religious community feel it necessary to ask the government to confer upon them certain rights and protections. If indeed our religious liberty is conferred by God and not by man-made government, we should heed the ‘hands-off’ admonition of the First Amendment to our Constitution. When legislative bodies attempt to do otherwise, the inclusions and omissions in their statutes can lead to discrimination, even though it may be unintentional. That is too great a risk to take.

This decision comes after pressures from the business community to veto the bill, including many film and television studios who threatened to boycott the state for filming if the law was passed. Among the companies that threatened to withdraw were Walt Disney Co., Marvel Studios, CBS, AMC, and many others. Additionally, the NFL stated that it would pull Atlanta out of consideration to host Super Bowl LIII in 2019, an event that would surely bring revenue to the state.

Despite this, Deal stated that he did “not respond well to insults and threats,”and cited Constitutional and moral principles for his decision to veto.

If this legislation sounds familiar, it may be because many similar “religious liberty” bills have been popping up recently in states such as Louisiana, Arkansas, and Indiana. It also comes in the wake of the passing of a contentious new law in North Carolina that has been widely criticized for being “anti-LGBT.” The next state to keep an eye on is Mississippi, whose House just passed a bill that supposedly protects religious liberty by prohibiting discrimination against anyone who believes that marriage is between a man and a woman.

Governor Deal’s veto shows a break away from the positions of many of the other conservative governors faced with similar legislation. Whether or not this was a decision based on economic interests or if it was truly about the “character of Georgia,” as the Governor claimed, can be debated;  it was, however, ultimately a win for LGBT rights in the state.

This fight isn’t over yet, however; while the case in Georgia has ben settled, those who believe that their “religious liberties” are in conflict with same-sex marriage will continue to wage their battles in state capitals all over the country.

Mariam Jaffery
Mariam was an Executive Assistant at Law Street Media and a native of Northern Virginia. She has a B.A. in International Affairs with a minor in Business Administration from George Washington University. Contact Mariam at mjaffery@lawstreetmedia.com.
Share:
Related ItemsGeorgiaLawLGBTNathan DealReligious Freedom