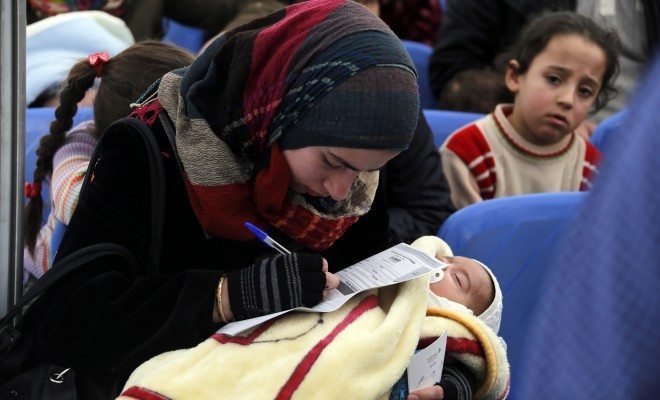 The “Covered Alien?”: House Votes for the SAFE Act

On November 18, 2015, the House voted 289-137 in favor of the the newly proposed “American Security Against Foreign Enemies Act,” or “SAFE Act,” with a larger than expected number of Democrats (47) joining the Republicans in passing the legislation. The major issue it seeks to address is national security in the wake of the Paris terrorist attacks and the Syrian refugee crisis that has been plaguing Europe for the last few months.

The act itself calls for a more in-depth screening process for “covered aliens,” granting the Director of the Federal Bureau of Investigation (FBI) the power to “take all actions necessary” in order to ensure a squeaky clean security clearance prior to admission as a refugee. What this means for the general population and the citizens of the United States is nothing more than a little security blanket we can drag around made out of taxpayer dollars. What this means for Syrian and Iraqi refugees, a group that already endures the most stringent admission into the United States lasting from 18-24 months, is more time in hell as we idly stand by bureaucratic red tape and paperwork that, statistically speaking, is not likely to affect us. Particularly insulting to this irrational and illogical spread of institutionalized fear and propaganda is that the Paris terrorists that have thus been identified are of French and Belgian nationalities. So naturally, Syrian refugees bear the weight of consequence.

What most catches the eye in the “SAFE” Act is the use of “covered alien,” which is defined as “any alien applying for admission to the United States as a refugee who A) is a national or resident of Iraq or Syria; B) has no nationality and whose last habitual residence was Iraq or Syria; or C) has been present in Iraq or Syria at any time on or after March 1, 2011.” While the ironic use of “covered alien” is unmistakable, the inclusion of Iraqi refugees in a discussion about national security pertaining to the admission of Syrian refugees into the United States is questionable.

American interests in Iraq have been evident long before President George W. Bush invaded the country on March 19, 2003. Following that date, the United States embarked on the longest invasion since the Vietnam War, costing an upward of $815.8 billion, claiming the lives of 149,053 civilians, as well as 4,637 military members, a majority of whom were United States soldiers, and resulting in a large migration of Iraqi people to find peace and refuge. While there is no question that many innocent Iraqi people were displaced during the invasion of Iraq for which U.S. decision-makers are responsible and have an obligation to, it appears that policy and lawmakers are, in part, trying to circumvent that obligation by lumping Iraqi refugees into a national security issue that has only been applied to Syrian refugees in an effort to cut some weight off of dues owed.

Iraqi refugees, who are not at the forefront of discussion in the Syrian refugee crisis, have now not only been displaced as a collateral consequence to the U.S. invasion, but are being further unjustly treated through cunning deceit by the hands of the very people that displaced them from their homes.

What is the political agenda here? United States citizens need to recognize the misguided policy-making taking place. The Syrian and Iraqi people are individuals trying desperately to survive. These are human beings that the United States has the capability to keep alive and an obligation to do so. Refugees are not the enemy and should not be treated as such, particularly through sloppy policy. While the focus stays on the “covered aliens,” citizens needs to be prudent and work to uncover policy truths.

While it is imprudent to say with certainty what is in store for the “SAFE” Act, speculation can be made on the basis of what has occurred. It remains unclear whether the Senate will indulge in any legislative discourse or action pertaining to the act, but if the bill were to pass Congress, President Obama has made clear that he would use his veto power to stop the act from becoming law. The problem with President Obama’s pledge is that the House only needs 290 votes, only one more than the last time it voted on the act, to override the president’s veto (with the Senate’s help too, of course). Only one thing is certain–this could lead to a power showdown between Congress and the Commander-in-Chief.

Ajla Glavasevic
Ajla Glavasevic is a first-generation Bosnian full of spunk, sass, and humor. She graduated from SUNY Buffalo with a Bachelor of Science in Finance and received her J.D. from the University of Cincinnati College of Law. Ajla is currently a licensed attorney in Pennsylvania and when she isn’t lawyering and writing, the former Team USA Women’s Bobsled athlete (2014-2015 National Team) likes to stay active and travel. Contact Ajla at Staff@LawStreetMedia.com.
Share:
Related ItemsAliensGovernmentHouse BillIraqi RefugeesLawNational SecurityPoliticsSyrian Refugees