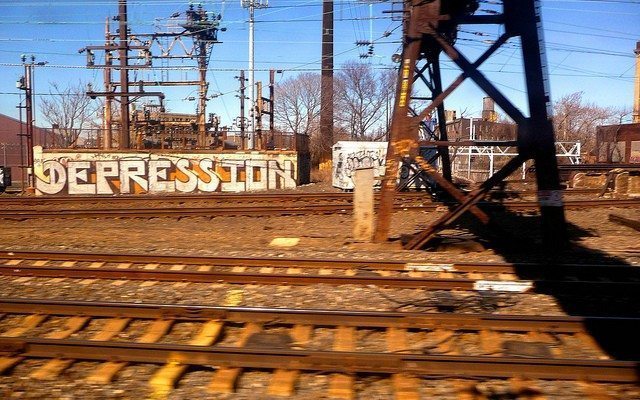 Mass Incarceration Leads to Depression, So Why Don’t We Stop?

This won’t be news to anyone who experiences it, but this “just in”–being targeted and locked up by racism and the criminal justice system dramatically increases people’s experiences of depression, suicide ideation, and many other types of “mental illness.”

Except here’s the thing: like Bruce E. Levine over at AlterNet has shown, the U.S. government’s Substance Abuse and Mental Health Services Administration (SAMHSA) has shoved under the table a survey that demonstrates the explicit connections between high rates of mental illness and mass incarceration, racism, unemployment, heterosexsim, and classism.

One of the most damning aspects of the survey is that the rate and severity of experiencing mental illness is double for adults who have contact with the criminal justice system compared with adults who don’t. (Seriously. Check it out.) There seems to be the perception that this country locks up people because they experience mental illness: this is often true, and is repulsive. But if we want to look at the proverbial big picture, we also have to consider the ways that mass incarceration–and the solitary confinement often involved with imprisonment–and the virulent racism that shapes the prison-industrial complex actually cause mental health issues.

Levine writes, “[f]or decades doctors — and Big Pharma — have pointed to neuroscience [as explanations for “mental illness”]. Cultural variables are often more telling.” Indeed. But by SAMHSA’s logic, why damn the system that produces these mental illness-causing oppressions when you can convince people to buy overpriced, toxic pharmaceuticals drugs and therapy from it?

Of course, people who experience these oppressions don’t need government-sponsored studies and surveys to elucidate the ways that racism, mass incarceration, classism, and heterosexism make many of us live with severely impaired mental health.

Personal Example Time: I am certain that my being a white queer woman in this society fundamentally shaped my diagnoses as depressed and bipolar. Expected to be easily “corrupted” and traumatized because of my whiteness and white privilege; expected to be dedicated to others and feel guilty for putting myself first because of my womanness and heterosexism; expected to daily endure the structural and interpersonal impacts of sexism and queerphobia and always be “polite” about it…my diagnoses (and the feelings that precipitated seeking them) are not surprising.

White men–much like those who shoot people in schools and much like Germanwings co-pilot Andrea Lupitz–are routinely portrayed empathetically by mainstream media sources (instead of being called terrorists) because of their emotional angst and “understandable” mental illness when they kill over 100 people. However, people (especially working-class women) of color who defend themselves against attack are imprisoned, villified, and pathologized. In light of this, the consequences of not addressing racism, heterosexism, and classism in mental health are… well… life-threatening.

And far, far beyond depressing: the causes and consequences are outraging.

Jennifer Polish
Jennifer Polish is an English PhD student at the CUNY Graduate Center in NYC, where she studies non/human animals and the racialization of dis/ability in young adult literature. When she’s not yelling at the computer because Netflix is loading too slowly, she is editing her novel, doing activist-y things, running, or giving the computer a break and yelling at books instead. Contact Jennifer at staff@LawStreetMedia.com.
Share:
Related ItemsCrime in AmericaDepressionGermanwingsHealthcareIncome InequalityMass IncarcerationMental HealthPoliticsRacismSchool ShootingsSocial MediaSolitary Confinement