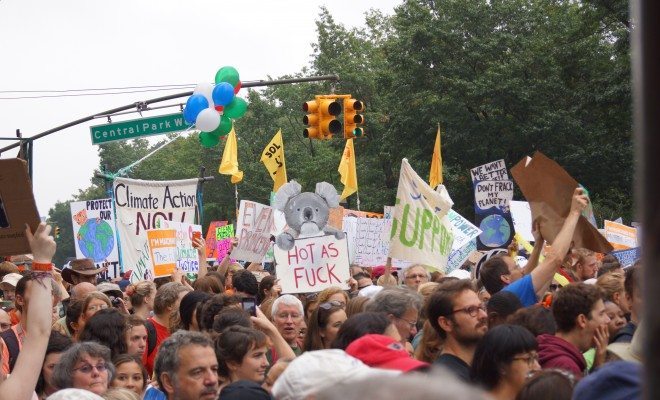 A View From Inside the People’s Climate March

The historic People’s Climate March took place last weekend in New York City. I drove up from Washington, D.C. with a friend to join the masses marching, singing, and chanting. We drove along pristine farmland and through rural towns seemingly unperturbed by any preoccupation with industrial development, followed by complexes of cookie-cutter housing and office buildings.

If you haven’t heard already, the People’s Climate March was a demonstration of popular support for action on climate change directed at world leaders attending yesterday’s United Nations climate summit. In describing New York City on Sunday, popular support would be an understatement; 400,000 people marched in the streets beside Central Park. Toward the end of the march, I saw a screen that was highlighting the other marches going on. Folks in Istanbul, Melbourne, New Delhi, and other cities around the world were passionate enough to demand climate justice. Beautiful and angry and hopeful and loud, that demand was palpable walking among strangers beside Central Park this Sunday.

I talked to one woman on the train ride into Penn Station from New Jersey who was also headed to the march. Julie was a bit older, but she didn’t want to sit down for the ride in; she was practicing her tennis stance for a championship coming up. I asked Julie why she was going to be marching that day. “Because I’m tired of big corporations controlling people’s health and lives,” she said without hesitation. Julie teaches public health at York College, so the issue hits close to home for her. That sentiment was widespread on the streets Sunday. Some people were demonizing specific businesses like Monsanto, the notorious genetically-modified organism company. Others’ criticisms were pointed more generally toward “big oil.”

Some signs told me that I wasn’t an environmentalist if I eat meat. Another told me to unplug my chargers when I’m not using them. This broad spectrum of environmental theories is typical of the larger movement. One of the hottest topics in the field now is communication; how do environmentalists communicate the need for certain policies and reforms? Because the issue of climate change is constantly present, it is difficult to rally people behind one event or offense. The paradox is found in how difficult it is to get people to care about something that continually surrounds them. It’s like breathing; despite its importance, who’s going to pay close attention to it?

The People’s Climate March was a loud reminder that this problem has to be addressed. The multitude of ideas that comprised the march could suggest that the movement isn’t united, or has bickering factions. But I see it as underscoring the varying effects of climate change. So many different groups of people, with wildly differing interests, are all hurt by environmental degradation. Some want to make sure animals are safe. Some want to make sure we have sustainable energy for the future. Julie wants to keep people’s health out of the hands of corporations. The beauty of the march — and the movement — lies in this diversity of noble goals for climate justice. We need to communicate that everyone has a stake in it, that everyone is affected.

More than anything else, we need to keep optimism alive. We have to believe that this UN climate summit will make progress. The statistics for climate change are darker than ever before, which is why people who want climate justice have to be more hopeful than ever before. It won’t be easy, but that needs to encourage us to work harder.

Jake Ephros
Jake Ephros is a native of Montclair, New Jersey where he volunteered for political campaigns from a young age. He studies Political Science, Economics, and Philosophy at American University and looks forward to a career built around political activism, through journalism, organizing, or the government. Contact Jake at staff@LawStreetMedia.com.
Share:
Related Items