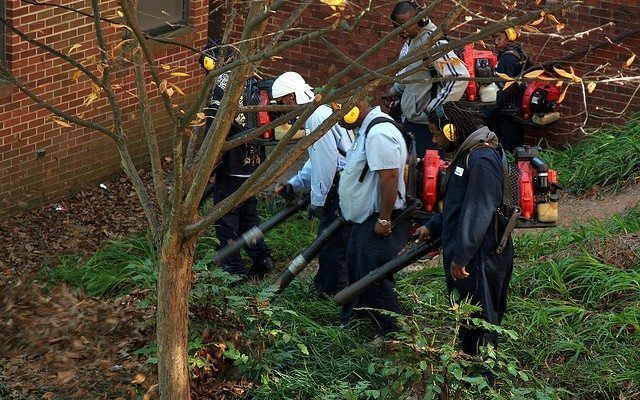 Leave the Leaves: Why Leaf Blowers are a Harmful and Pointless Practice

Due to the incredibly loud and incessant drone of the machines, I angrily slam my window shut and stomp back to my desk where I’m finally able to hear myself think and the gasoline-induced headache starts to dissipate. Throughout the autumn and early winter, leaf blowers are constantly running. In fact, as I write this I can hear some in the distance. (My window is closed right now.) In addition to the noise pollution and annoyance, there may be substantial health hazards to using them.

Due to the fact that most leaf blowers run on gas-powered engines, they emit harmful byproducts into the air such as ozone and carbon monoxide. In fact, one report suggested that a single leaf blower in continuous use for an hour produces the same amount of pollution as seventeen cars. In light of the recent study by the Intergovernmental Panel on Climate Change and subsequent dialogues regarding the need to reduce emissions, this practice can certainly be placed on the chopping block.

This is not to say that seasonal use of leaf blowers accounts for such a substantial portion of national emissions so as to induce climate change, but if setting standards for corporations and industries is so difficult then here is an unnecessary practice that can easily be eliminated or replaced with alternatives. Attacking the broad aspects of climate change and emissions has proven difficult; why not chip away piecemeal at the smaller problems in the meantime? The head of the New Jersey Landscape Contractors Association, Jody Shilan, pointed out that manufacturers are looking into less toxic machines. Presumably these would be electric motors or something of that nature. This would help, but there are other problems that leaf blowers cause.

Courtesy of Anthony Appleyard via Wikipedia.

Using leaf blowers stirs up dirt, allergens, molds and spores. Therefore in addition to the fossil fuel pollution, they contaminate the air in these additional manners. Perhaps this is the cause of some headaches and dizziness? Often the users of leaf blowers, particularly landscapers, can be seen wearing masks over their noses and mouths. This speaks to the localized air contamination that they induce. Further, what about the people who pass by and do not have a mask in their pocket to put on? I have found that my lungs and eyes can get irritated while passing through an area in which leaf blowers are being used while walking my dog or waiting for the bus.

There is nothing wrong with a good old fashioned rake. Raking leaves provides some physical activity, and often is surprisingly pleasant in the crisp autumn air. When I was little, my family and I would rake up the leaves in the backyard together. It was a fun family activity, and we would stuff them all into large orange & black plastic bags that, when full, looked like giant Jack-O-Lanterns for the Halloween and Thanksgiving season. Granted, some people such as the elderly or those with physical impediments would be hard pressed to clear their yard of leaves themselves.

Most of the time the leaves end up in large piles on the roadside, which are hazardous in their own right. There are supposed to be town regulations as to how wide the piles can be, but these are never enforced. When I walk my dog I often find that we have to venture out into the middle of the road in order to pass around an oversized pile. Even drivers themselves might find this dangerous, as a large pile of leaves prevents cars traveling in opposite directions on some of the smaller roads, such as the one on which I live, to pass each other simultaneously.

It’s fun to hang out in the leaves. Courtesy of Franklin R. Halprin

So why is it so important that we clear the leaves away at all? They’re not hurting anybody by remaining as they lie on the grass. In fact, they are beneficial; leaves eventually decompose and provide nutrients for the soil. Ultimately what it comes down to is aesthetics. I have previously addressed the socially motivated environmental problems of green lawn aesthetics. Similar forces are at play here. A yard full of randomly fallen leaves looks messy and unattractive to many people; it is important to keep one’s lawn clean and organized. There may even be financial ramifications, such as falling home prices for attempted autumn sales. For these reasons, arguments in defense of leaf blowers that point out that lawn mowers also cause air pollution are nil; it is just a different season’s manifestation of the same problem.

Clark University, MA. The leaves in fact give the scene a little something extra. Courtesy of Franklin R. Halprin.

We love the autumn because the leaves change colors and become pretty. So why is it so bad when they fall to the ground? Then the ground is pretty too. We have obsessively established certain aesthetic rules, which force us to choose between ourselves and our environment. We need to think of the two together; instead of imagining that things must be a certain way and we must intervene in order to reestablish the standard, we should be more flexible in adapting to the changes that occur naturally.

Franklin R. Halprin
Franklin R. Halprin holds an MA in History & Environmental Politics from Rutgers University where he studied human-environmental relationships and settlement patterns in the nineteenth century Southwest. His research focuses on the influences of social and cultural factors on the development of environmental policy. Contact Frank at staff@LawStreetMedia.com.
Share:
Related ItemsAutumnFallLawn AestheticsLeaf BlowersLeavesRaking