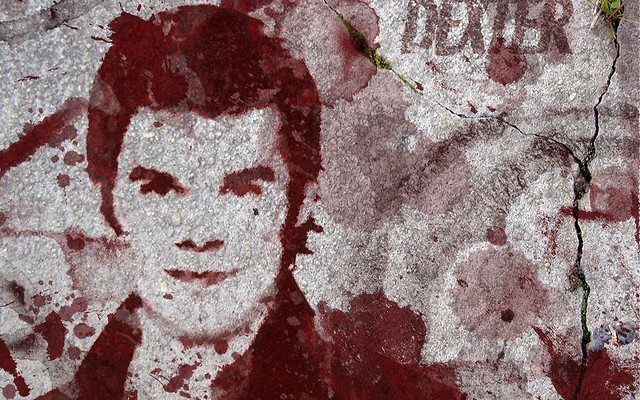 This week, 19-year-old Miranda Barbour confessed to killing at least 22 people in Alaska, California, Texas, and North Carolina, all as a result of her involvement in an Alaskan satanic cult.

She was arrested in Sunbury, Pa., for the November homicide of a man she met through Craigslist. Allegedly, Miranda lured 42-year-old Troy LaFerrera into her Honda CR-V through a “companionship” ad on Craigslist. She agreed to have sex with him for $100, but wound up stabbing him 20 times instead.

Barbour’s described herself as akin to Dexter — a fictional, vigilante serial killer who murdered other criminals — because she only killed “bad” people, who “didn’t deserve to be here anymore.”

Folks, this story is crazy pants. If you thought the Amanda Knox or Jodie Arias cases were big, just wait for this one to gain some more traction. True insanity is about to descend upon the news-reading American population. And that’s because we’re fascinated with all that’s fucked up. We love a good serial killer. It’s literally the first thing you learn in journalism school — if it bleeds, it leads.

And this Miranda Barbour story is fucking hemorrhaging.

Here’s the inside scoop on her background. If you can, try to refrain from imagining the accompanying Lifetime movie that’s most definitely in pre-production as we speak. According to her own accounts, Miranda Barbour grew up in Alaska — the coldest, darkest, most mysterious state in this gigantic nation. AKA, the perfect setting for a truly fucked up story.

At age four, Miranda was molested by a family member. (Presumably, we’re supposed to consider this the root cause of all her later transgressions.) By age 13, she’d gotten her first taste of murder. Accompanying the leader of the satanic cult she would subsequently join, Miranda went to a dark alley to meet a man who owed the cult leader money.

Then, according to Miranda, “[H]e said to me that it was my turn to shoot him. I hate guns. I don’t use guns. I couldn’t do it, so he came behind me and he took his hands and put them on top of mine and we pulled the trigger. And then from there I just continued to kill.”

During her years in the cult, Miranda climbed to the top of the ranks, and even married another cult official, who was later murdered. At one point, she became pregnant, and the group drugged her, tied her to a bed, and performed an “in-house” abortion.

When she got pregnant for the second time, she decided to leave the cult — and Alaska — behind, moving to North Carolina.

“I wanted to start over and forget everything I did,” said Miranda.

Apparently, though, that didn’t really work out for her, seeing as she claims her killing streak continued after she left Alaska, dropping bodies across several states.

Her daughter is now a year and a half old, and is currently being held in protective custody. Miranda is allowed to visit.

Now, the details about the Satanic cult are interesting, for sure. This story reads like the juiciest of true crime novels. But, what’s really interesting about this story, is how completely batshit crazy it has the potential to get.

Here’s why: there is absolutely no corroborating evidence of Miranda’s involvement in a Satanic cult, or in any previous killings.

“Thorough investigation will likely demonstrate that this cult story is fiction,” said Peter Gilmore, the New York-based head of the Church of Satan, who confirmed that his church does not condone murder. Likewise, Monica Caison, the founder of a missing persons center in North Carolina, is skeptical about Miranda’s serial killer claims.

“That’s a lot of people to kill in such a short time, and being so young and never making a mistake, I’m hard pressed to believe that amount,” said Caison, referring to Miranda’s claim that she’d killed somewhere between 22 and 100 people over the last six years.

Not to mention, she doesn’t fit the profile. Women serial killers are typically older and don’t use knives, and serial killers in general are exponentially better at stashing bodies. Miranda’s latest Craigslist victim? Dumped in a backyard, with intact cell phone and identification, right in the same town that the murder took place.

That doesn’t look like the work of a pro.

But, despite the doubtful nature of her claims, Miranda’s story didn’t sound rehearsed. According to Francis Scarcella, the reporter who broke this story, she never hesitated once as she recounted her dark life into his audio recorder. Scarcella described her as meek, mild, and generally unintimidating.

But of course, “Looks can be deceiving,” as Barbour quickly pointed out, destroying the sexist assumptions that paint women — even serial killer women — as harmless victims or benign liars.

But what shocked Scarcella the most? When asked if she felt any remorse for her killings, Miranda replied with, “None.” And further, she unequivocally stated that if she was ever released from prison, she would kill again.

And therein lies the crazy. While Miranda’s story is perhaps implausible, her delivery is incredibly convincing. Whether or not her claims are true, she seems to believe them wholeheartedly, and she’s got the rest of us scratching our heads, trying to make sense of the nonsensical web she’s spun with her words.

That’s the hallmark of a true, psychopathic manipulator, and she’s got every one of us on the hook.

What do you think of the developing Miranda Barbour story?

Featured image courtesy of [The Bay Harbor Butcher via Flickr]

Hannah R. Winsten
Hannah R. Winsten is a freelance copywriter, marketing consultant, and blogger living in New York’s sixth borough. She hates tweeting but does it anyway. She aspires to be the next Rachel Maddow. Contact Hannah at staff@LawStreetMedia.com.
Share:
Related Itemscapital crimeCapital PunishmentCraigslist killerCrime in AmericaDeath PenaltyDexterFelonyMiranda BarbourMurderNewsSatanismSerial KillerWomen